The Martyrdom of Perpetua and Felicitas is long, but well worth reading, especially if you want to stir up your own faithfulness to Christ. However, you can jump straight to their martyrdom using the links below.

Several young catechumens [catechumen - a person being catechized, or indoctrinated in foundational teachings]—Revocatus and his fellow-servant Felicitas, Saturninus and Secundulus—were apprehended.

Among them also was Vivia Perpetua, respectably-born, liberally-educated, a married matron, having a father and mother and two brothers, one of whom, like herself, was a catechumen. She also had a son, an infant at the breast. She herself was about twenty-two years of age.

From this point onward she shall herself narrate the whole course of her martyrdom, as she left it described by her own hand and with her own mind.

Chapter One: Perpetua's Arrest and Assignment to the Dungeon

Perpetua Argues with Her Father

While we were still with the persecutors, my father, for the sake of his affection for me, was persisting in seeking to turn me away and to cast me down from the faith. I said, "Father, do you see—for example—this vessel lying here as a little pitcher or as something else?"

Please don't miss the commitment of the early Christians.

Perpetua, though she sees the affection of her father, does not regard her father's pleas as a rescue, but as "seeking to turn me away and to cast me down from the faith."

Later, she will mourn that her father alone, of all her family members, cannot rejoice with her in her martyrdom.

He said, "I see it as a little pitcher."

I replied to him, "Can it be called by any other name than what it is?" And he said, "No."

"Nor can I call myself anything else than what I am, a Christian."

Then my father, provoked at this saying, threw himself upon me, as if he would tear my eyes out. But he only distressed me and went away overcome by the devil's arguments.

Then, a few days after I had been without my father, I gave thanks to the Lord. His absence became a source of consolation to me. In that same interval of a few days we were baptized, and the Spirit showed me that outside of the water of baptism nothing else was to be sought for bodily endurance.

Perpetua Goes to the Dungeon

After a few days we were taken into the dungeon, and I was very much afraid because I had never felt such darkness. Oh terrible day! Oh the fierce anger of the soldiers, provoked by the crowds!

I was very unusually distressed by my anxiety for my infant. Tertius and Pomponius were present there, the blessed deacons who ministered to us. They had arranged—by means of a bribe—that we might be refreshed by a few hours in a more pleasant part of the prison.

Out of the dungeon, all of us were able to attend to their own needs. I nursed my child, who was now weakening with hunger. In my anxiety for him, I addressed my mother and comforted my brother, and commended my son to their care. I was brooding because I had seen them brooding on my account.

I suffered such tension for many days. Then I arranged for my infant to remain in the dungeon with me; and immediately I grew strong and was relieved from distress and anxiety about my infant. The dungeon became like a palace to me, so that I preferred being there to being elsewhere.

Perpetua Has a Vision that She Will Be Martyred

Then my brother said to me, "My dear sister, you are already in a position of great dignity, and are such that you may ask for a vision and to know whether this imprisonment is to result in suffering or an escape."

I knew that I was privileged to converse with the Lord, whose kindnesses I had found to be so great, so I boldly promised my brother, "Tomorrow I will tell you."

Then I asked, and this was what was shown me. I saw a golden ladder of marvellous height, reaching all the way to heaven. It was very narrow, so that persons could only ascend it one at a time. On the sides of the ladder was fixed every kind of iron weapon. There were swords, lances, hooks, and daggers, so that if any one went up carelessly, or without looking up, he would be torn to pieces and his flesh would cleave to the iron weapons. 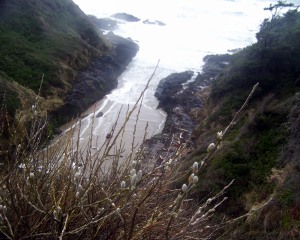 Under the ladder itself crouched a dragon of wonderful size, who lay in wait for those who ascended, and frightened them from the ascent. Saturus went up first, who had afterwards delivered himself up freely on our account, not having been present at the time that we were taken prisoners. He reached the top of the ladder, turned towards me, and said, —Perpetua, I am waiting for you; but be careful that the dragon does not bite you."

I said, "In the name of the Lord Jesus Christ, he shall not hurt me." Then, from under the ladder—as if in fear of me—he slowly lifted up his head. As I trod upon the first step, I trod upon his head.

I went up, and I saw an immense extent of garden. In the midst of the garden a white-haired man sitting in the dress of a shepherd, of a large stature, milking sheep. Standing around were many thousand white-robed ones. He raised his head, looked at me, and said, "You are welcome, daughter." Then he called me, and he gave me a little section of the cheese as he was milking.

I received it with folded hands. Then I ate it, and all who stood around said Amen. And at the sound of their voices I was awakened, still tasting a sweetness which I cannot describe.

I immediately related this to my brother, and we understood that it was to be a suffering, and from then on we stopped having any hope in this world.

Go to Chapter Two of Six