After a few days, Pudens, a soldier, an assistant overseer of the prison, who began to regard us in great esteem, perceived that the great power of God was in us. He admitted many brethren to see us, so that both we and they might be mutually refreshed.

When the day of the exhibition drew near, my father, worn with suffering, came to me. He began to tear out his beard and to throw himself on the ground on his face. He reproached his years, and uttered such words as might move all creation. I grieved for his unhappy old age.

Perpetua's Vision of an Egyptian and Gladiator Battle

The day before that on which we were to fight, I saw in a vision that Pomponius the deacon came to the gate of the prison and knocked vehemently. I went out to him, and opened the gate for him. He was clothed in a richly ornamented white robe, and he had on many small ornaments.

He told me, —Perpetua, we are waiting for you. Come!" 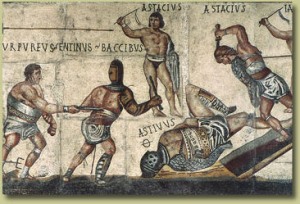 He held his hand to me, and we began to go through rough and winding places. We had hardly arrived, breathless, at the amphitheatre, when he led me into the middle of the arena, and told me, "Do not be afraid, I am here with you, and I am laboring with you." Then he left.

I gazed upon an immense assembly in astonishment. Because I knew that I was given to the wild beasts, I marveled that the wild beasts were not let loose on me. Then there came out against me a certain Egyptian, horrible in appearance, with his backers, to fight with me. Then there came to me, as my helpers and encouragers, handsome youths. I was stripped, and I became a man.

My helpers began to rub me with oil, as is the custom for contest, and I saw that Egyptian on the other side rolling in the dust.

A man came out, of wondrous height, so that he was taller than the amphitheater. He wore a loose tunic and a purple robe between two bands over the middle of his breast. He had on small ornaments of varied form, made of gold and silver, and he carried a rod—as if he were a trainer of gladiators—and a green branch upon which were apples of gold.

He called for silence, and said, "This Egyptian, if he overcomes this woman, shall kill her with the sword. If she conquers him, she shall receive this branch." Then he departed.

We drew near to one another and began to deal out blows. He tried to lay hold of my feet, while I struck at his face with my heels. I was lifted up in the air and began to thrust at him in this way as if spurning the earth. But when I saw that there was some delay I joined my hands so as to twine my fingers with one another. I grabbed his head, and he fell on his face. Then I trod upon his head.

The people began to shout and my backers to exult. I drew near to the trainer and took the branch. He kissed me and told me, "Daughter, peace be with you." I began to go gloriously to the Sanavivarian gate.

Then I awoke and saw that I was not to fight with beasts, but against the devil. Still I knew that the victory was awaiting me. To this point I have written all this several days before the exhibition. What passes at the exhibition itself let whosoever will write.

Go to Chapter Four of Six