Modern Christianity:
The Era of the Free Churches

And so we come to the seventh and last period of our overview: modern Christianity. I hope the journey's been enlightening.

Christian Religion History has profiles of most major denominations. Even after my modern section is complete, you'll find his more quick and to the point. (I, of course, do very little that's quick, and almost nothing that's not tinged with my personality.)

Let's begin with a rapid overview of Christianity prior to the modern era as a review. (If we can do this, it will be quite an accomplishment! More than 1500 years in bullet list!)

Let's describe what happened in modern Christianity from there. 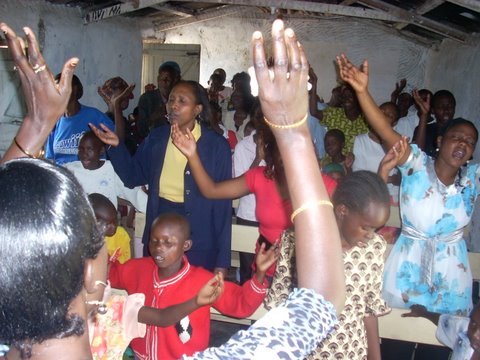 Worship at a church in Nakuru, Kenya

The Foundation of the Free Churches

I would love to have links for many of the modern Christianity groups referenced on this page, but I just do not have time. Eventually, maybe even next year, I could get to pages on the Waldensians, Lutherans, or Albigenses (for example), but there are many other more pressing pages now.

Would you like to write an article to become a page on this site?

It needs to be under 2,000 words. You can use the Contact Me form to find out where to send it. I'm going to check and edit it, so don't offer to help if you're sensitive.

The benefit to you is that I will credit you for the article and link a site for you, your own or another. A link from this site is worth something because my traffic is decent, and it will only continue to grow. (How do I know? Thank you SiteBuildIt!)

My thanks to Chloe Joy, age 16, for her excellent writeup on Hudson Taylor.

It was inevitable that once the Roman Catholic church's power was broken, others would want to free themselves from the rule of the Lutheran (Germany) and Reformed (Switzerland, Holland, and Scotland) Churches and the Church of England.

The Puritans were the greatest source of free churches in modern Christianity. At first this was a movement in the Church of England that wanted to purify the Church (from Catholic dogma, not necessarily purity of life). When this failed, others arose, called "Separatists," who determined that if they could not reform the Church, they would form their own.

These Puritans turned Separatists went in all directions, but primarily to Holland and to the New World, which provided tremendous opportunity to escape religious persecution.

Other Free Churches in Modern Christianity

The atmosphere was now such that it was no longer unthinkable to leave the state church, and it began happening more and more often. In England in the 16th century, George Fox founded "societies of friends" all over England who would become known as Quakers.

In the 18th century, Anglican priest John Wesley founded societies of "Methodists" in the new world. While he intended them to remain part of the Church of England, it was apparent to all others that they would not. They rapidly became their own denomination.

One of the larger free churches of modern Christianity, of course, is the Baptist church. It would be more proper to say Baptist churches, however, since I saw a book 25 years ago describing 200 different denominations of Baptists in the United States. It's commonly thought that these descended from the Anabaptists, but they did not.

Both Brethren and Baptist writers have tried to trace their ancestry to the 1st century in books like The Trail of Blood and The Pilgrim Church, but there is no validity to these claims. The history of the Church is like a tree with many branches. They all have one trunk.

The founders of Lutherans, Methodists, Baptists, Quakers, and Plymouth Brethren were all former Catholics, Anglicans, or Puritans. Groups like the Montanists, Novatianists, and Albigensians left no descendants.

The Waldensians, far from founding any descending groups, were instead absorbed into the Reformation, though there are still Waldensian churches (holding Reformation doctrines). I found a library and museum in Valdese, NC. I hope to write an article on their history.

The Baptist denominations are descended from British Separatists, though they did adopt the Anabaptist practice of rebaptizing converts from the Churches practicing infant baptism (which included all the major Reformation churches). In fact, it is likely this influence came to the Baptists through Mennonite (a Dutch branch of the Anabaptists) influence upon John Smyth and Thomas Helwys around 1608 to 1610.

You can read a more thorough history of the Baptists from the British Baptist Historical Society at Christianity Today.

A major influence on my own life has been the Plymouth Brethren churches and their successors. These arose in England in the early 19th century, founded by a man named J.N. Darby. Darby later excommunicated other brethren churches and fled to Switzerland claiming the church age was over, but the Brethren legacy in England did not die. Quite the opposite! It survived to influence not just me but much of modern Christianity.

Some of the most notable 19th and early 20th century missionaries and teachers were of Brethren descent. Men and women like Hudson Taylor, C.T. Studd, Amy Carmichael, Jim Elliott, George Mueller, and Watchman Nee all were strongly brethren influenced.

Pentecostal churches did not arise until the 20th century, sparked by the Azusa Street Revival in the Los Angeles area in 1906.

Roman Catholicism had to do a lot of adapting after the Reformation. First, they had their own counter-Reformation, led by Ignatius of Loyola. They also convened a council to assess and reaffirm their own doctrines in 1545 called the Council of Trent. Interestingly enough, this council met convened 25 times over 18 years, not ending until 1563. 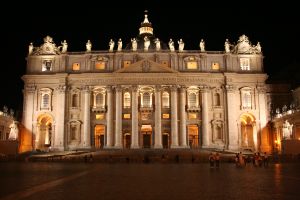 St. Peter's Basilica, one of the most famous Roman Catholic Cathedrals
Photo by Oriol Ventura Pedrol

The Reformation and the centuries afterward stripped the Roman Catholic Church of almost all its political power. First churches freed themselves from the rule of state churches, and only later did the governments begin to strip themselves of the influence of the various major churches.

The Roman Catholic church retained much of its influence (and still does) over Italy, Spain, and Portugal. As a result, they also had and have much influence over South America, which was colonized by Spain and Portugal.

Distance, however, and conversion by the sword, which rarely if ever converts the heart, has led to a very different form of Catholicism in South America. In many places, it is mixed with local nature religions, including voodoo. Even where it is not, the emphasis on the veneration of saints and Mary is much greater in the South American countries (and Mexico) than in Europe and North America.

Modern Christianity influences, Protestant criticism, the 60's rebellion, or perhaps simply the liberal bent of Pope Paul XXIII, led to large changes in Catholicism beginning in the 1960's. The Mass, which had always been said in Latin, was translated into the local vernacular. Protestants were embraced as "separated brethren," and numerous other policies were relaxed. (For example, lay ministers, at first only men but later including women, were allowed to distribute the Eucharist to Mass attendees.)

Modern Christianity in the 21st Century

There are many influences responsible for the state of modern Christianity in the 21st century. There was a tendency to liberal theology among Protestants and Catholics in the 19th century, influenced—in the opinion of many historians—by the rising authority of science.

By the early 20th century, however, this led to a backlash against liberal theology and fundamentalism arose. Fundamentalists wanted a return to a strict, enforceable orthodoxy and to renewed reverence for the Bible. Fundamentalists have become a powerful force in American religion and politics, though they have had very little influence in Europe.

One of the largest influences on our 21st century modern Christianity, however, is the 60's rebellion against all types of established authority in America. The rising emphasis on individualism led to a rapid increase in the number of denominations as well as to an increase in unchurched or home-churched Christians. It has also led to many unusual (from a historical standpoint) worship methods, with even rock music becoming part of Christian worship.

Today it remains to be seen what will become of our churches in the  information age. The rise of the internet has given voice to numerous people who would have had no audience 30 years ago, or very little (like myself, in fact). What effect this will have on Christianity is hard to predict. If you are reading this, you are on the internet, and probably know the state of modern Christianity better than I did when I wrote this.

Return to Overview of Christianity