The Martyrs Are Taken To Heaven

Also, the blessed Saturus told us this vision, which he himself committed to writing.

We had suffered, and we were gone forth from the flesh, and we were beginning to be carried by four angels into the east. Their hands were not touching us. We floated not supine, looking upwards, but as if ascending a gentle slope. 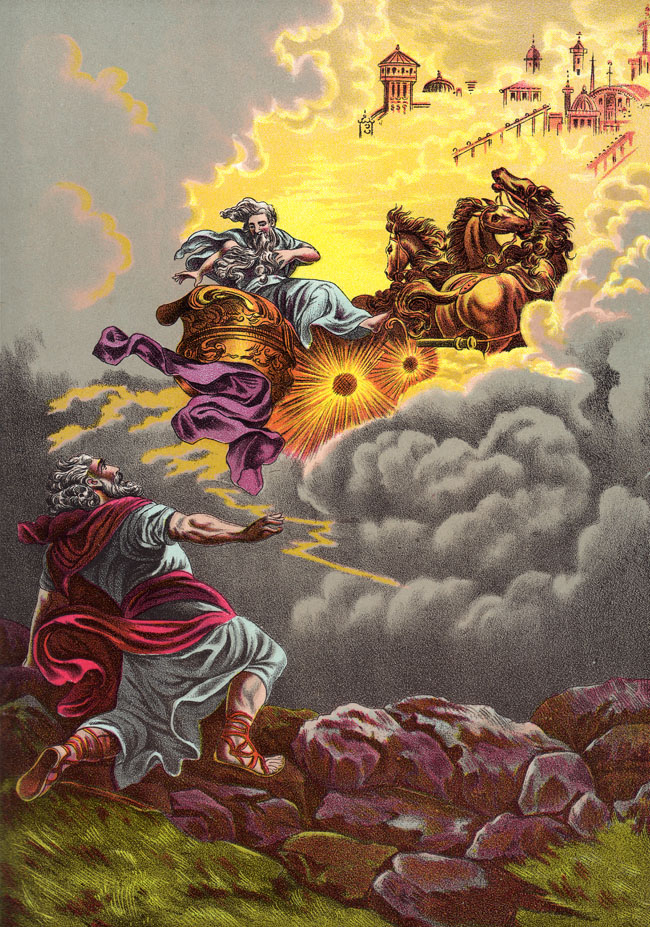 Elijah Being Caught Up to Heaven

Being set free, we eventually saw the first boundless light. I said, "Perpetua" (for she was at my side), "this is what the Lord promised to us. We have received the promise!"

While we were carried by those same four angels, we saw a vast space which was like a pleasure-garden. It had rose bushes and every kind of flower. The height of the trees was like a cypress, and their leaves were falling incessantly.

On top of this, there in the pleasure-garden four other angels appeared, brighter than the previous ones. When they saw us, they gave us honor and said to the rest of the angels, "Here they are! Here they are!" with admiration.

Those four angels who carried us became very afraid and put us down. After we covered the space of a furlong on foot on a broad path, we found Jocundus, Saturninus and Artaxius. They were burnt alive at the same persecution. We also saw Quintus, also a martyr, but he had departed in the prison.

We asked them where the rest were, but the angels told us, "Come. First enter and greet your Lord."

Saturus and Perpetua Are Taken to the Throne Room

We came near the place, the walls of which were as if they had been built of light. In front of the gate of that place stood four angels, who clothed those who entered with white robes.

Once clothed, we entered and saw the boundless light, and heard the united voice of some who said without ceasing, "Holy! Holy! Holy!" In the midst of that place we saw what seemed to be an old man with snow-white hair but a youthful countenance. We could not see his feet. On his right and left hand were twenty-four elders, and behind them a great many others were standing.

We entered with great wonder and stood before the throne. The four angels raised us up, and we kissed Him. He passed His hand over our face, and the rest of the elders said to us, "Let us stand."

We stood and made peace, and the elders said to us, "Go and enjoy." And I said, "Perpetua, you have what you wanted!"

She said, "Thanks be to God, that joyous as I was in the flesh, I am now more joyous here."

We went out, and we saw before the entrance Optatus the bishop at the right hand, and Aspasius the elder, a teacher, at the left hand. They were separate and sad. They threw themselves at our feet, and said, "Restore peace between us, because you have gone and have left us this way."

We said, "Are you not our father, and you our elder, that you should throw yourselves at our feet?" And we prostrated ourselves, and we embraced them. Perpetua began to speak with them, and we drew them apart in the pleasure-garden under a rose bush.

While we were speaking with them, the angels said unto them, "Leave them alone, that they may refresh themselves. If you have any dissensions between you, forgive one another." Then they drove them away.

Then they said to Optatus, "Rebuke your people, because they assemble with you as if returning from the circus, and they argue about divisive matters."

Then it seemed to us as if they would shut the doors. In that place we began to recognise many brethren, and martyrs as well. We were all nourished with an indescribable odor, which satisfied us.  Then, I joyously awoke.

Go to Chapter Five of Six