After a few days we heard a rumor that we would be tried. And then my father came to me from the city, worn out with anxiety. He came up to me, trying to cast me down, saying, "Have pity my daughter, on my grey hairs. Have pity on your father, if I am worthy to be called a father by you. If with these hands I have brought you up to this flower of your age, if I have preferred you to all your brothers, do not deliver me up to the scorn of men. Have regard to your brothers; have regard to your mother and your aunt; have regard to your son, who will not be able to live after you. Lay aside your courage, and do not bring us all to destruction; for none of us will speak in freedom if you should suffer anything."

My father said these things in his affection, kissing my hands, and throwing himself at my feet. With tears he called me not daughter, but lady. And I grieved over the grey hairs of my father, that he alone of all my family would not rejoice over my suffering.

So I comforted him. I said, "On that scaffold whatever God wills shall happen. For know that we are not placed in our own power, but in that of God."

And he departed from me in sorrow.

One day, while we were at dinner, we were suddenly taken away to be tried.

We arrived at the town hall. At once the rumor spread through the neighborhood, and an immense number of people were gathered together.  We mounted the platform. The rest were interrogated and confessed. Then they came to me, and my father immediately appeared with my boy. He withdrew me from the step, and said in a supplicating tone, "Have pity on your babe." 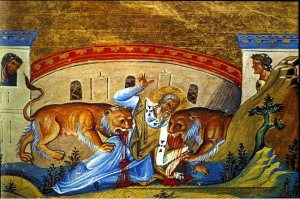 Hilarianus the procurator, who had just received the power of life and death in the place of the proconsul Minucius Timinianus, who was deceased, said, "Spare the grey hairs of your father; spare the infancy of your boy; offer sacrifice for the well-being of the emperors."

Hilarianus said, "Are you a Christian?"

I replied, "I am a Christian."

As my father stood there to cast me down from the faith, he was ordered by Hilarianus to be thrown down and was beaten with rods. My father's misfortune grieved me as if I myself had been beaten, I so grieved for his wretched old age.

The procurator then delivered judgment on all of us and condemned us to the wild beasts, and we went down cheerfully to the dungeon.

Then, because my child was used to nursing from me and staying with me in the prison, I sent Pomponius the deacon to my father to ask for the infant. But my father would not give him to him.

Then, even as God willed it, the child no long desired the breast, nor did my breast cause me uneasiness! I would not be tormented by care for my babe and by the pain of my breasts at once.

Perpetua Has Another Vision in Prayer

If what follows appears to be prayer for the dead, that's because it is.

You can do with that what you will. My explanation is that the early churches saw only a small gap between the next life and this one. They felt connected to their departed brothers and sisters, and it seemed normal to them that they would continue to pray for one another.

Note, however, that this is prayer for her departed brother, not to him. Unlike Jesus, who said he would be with us always, departed saints are not omnipresent, and they cannot hear prayer.

After a few days, whilst we were all praying when suddenly, in the middle of our prayer, there came to me a word: Dinocrates. I was amazed, since that that name had never come into my mind until then, and I was grieved as I remembered his misfortune.

I felt myself immediately to be worthy and to be called to pray on his behalf. I began to make supplication for him earnestly and to cry with groaning to the Lord. Without delay, on that very night, the following was shown to me in a vision.

I forgot I'd have to tell you about this. I'll make a page for you eventually, but here's the short of it.

Remember Lazarus and the rich man in Luke 16? One was in paradise, the other in a place of torment and flames.

That place, to the early church, was Hades. There was a good side, and a bad side. At the judgment, both sides will be emptied, and everyone will receive their final judgment of the kingdom of God or the lake of fire (Matt. 25:31-46; Rev. 20:11-15).

Most denominations today teach something very similar in their seminaries, though it's rarely mentioned in church. The only difference is that today we say that Hades was emptied when Christ rose. That's not what the early churches believed.

Perpetua was praying that her brother move from the rich man's place to Lazarus' place. Since the judgment hasn't happened yet, that made perfect sense to her and the churches of her day.

I saw Dinocrates going out from a gloomy place, where there were also several others. He was parched and very thirsty, with a filthy countenance, pallid color, and the wound on his face which he had when he died.

This Dinocrates had been my brother after the flesh, seven years of age, who died miserably with disease. His face being so eaten out with cancer that his death caused repugnance to all men.  For him I had made my prayer. Between him and me there was a large gap, so that neither of us could approach the other.

Also, in the same place where Dinocrates was, there was a pool full of water. Its brink was higher than the stature of the boy, and Dinocrates raised himself up as if to drink. I was grieved that, although that pool held water, still, because of the height to its brink, he could not drink.

I was aroused and knew that my brother was in suffering. But I trusted that my prayer would bring help to his suffering, and I prayed for him every day until we passed over into the prison of the camp, for we were to fight in the camp show. Then was the birth-day of Geta Caesar, and I made my prayer for my brother day and night, groaning and weeping that he might be granted to me.

Finally, on the day on which we remained in fetters, I was shown this: I saw that the place which I had formerly observed to be in gloom was now bright. Dinocrates, with a clean body, well-clad, was finding refreshment. Where there had been a wound, I saw a scar. That pool which I had seen before, I now saw with its rim lowered to the boy's navel.

Someone was drawing water from the pool incessantly, and upon its brink was a goblet filled with water. Dinocrates drew near and began to drink from it, and the goblet never emptied. When he was satisfied, he went away from the water to play joyously, like children do, and I awoke. Then I understood that he was translated from the place of punishment.

Go to Chapter Three of Six