Thomas Aquinas (1225-1274) became the primary theologian for the Roman Catholic Church, and greatly influenced the theology and thought of  many other groups, including Lutheran and Reformed, as well as others.

In response to the increasing influence of Aristotelianism, Muslim and Jewish thought, along with scientific information that had been lost by, or was new to, the west being put forth at the University of Paris at the time, Aquinas sought to use what he called "science" to systematically answer teachings that were circulating in his day in regard to the "Christian" perspective (largely defending the current traditions and practices of Rome) using reason and "natural law," along with scripture and other writings. 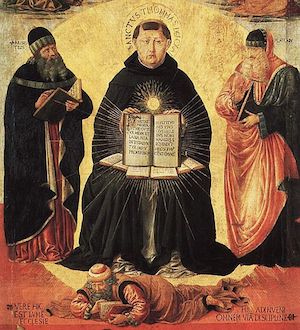 Born around 1225 in Roccasecca Castle, 8 kilometers north of Aquino (from which "Aquinas," meaning "of Aquino," comes),  in southern Italy, to aristocratic parents in an area disputed by the emperor and the Pope, Thomas Aquinas was tutored from a young child to be a cleric in the Roman Catholic Church.

His parents wanted him to join the ancient Benedictine Order, probably in hopes of him becoming a powerful abbot (like his uncle) to their political advantage, a practice that was common among "noble" families of the times. (They often would stop at nothing to get their relatives in high church positions because of the power of the Roman Church in affairs of money and political intrigue.)

When Thomas Aquinas later wanted to join the more recently formed Dominican Order, who were preachers, his parents had him kidnapped by his brothers for over a year in order to dissuade him. His brothers, reportedly, went so far to control him as to bring him a prostitute. The story goes, that he chased her away with a flaming stick.

Eventually, his family gave up and arranged for his "escape" through a window in order to save face at having lost the battle for his future.

Moving On to Study and Teach

In 1245 Thomas Aquinas went on to study at the University of Paris, where he met and was influenced by Albertus Magnus, a Dominican who was the head of the department of theology. Three years later, when Magnus left for Cologne, Aquinas also went there, where he became a Bible teacher and writer. Returning to Paris in 1252, where he stayed until 1259,  he studied to be, and eventually became, a master in theology and full professor, continuing to write extensively (including writing his famous, Summa contra Gentiles) and teach.

Around 1259, he was appointed theological advisor to the papal court spending some time with the pope and his court and also sent out to teach friars who could not attend the university, at communal living facilities in Naples and Orvieto. Then in 1265, Aquinas founded a university at the Dominican priory at Rome. While there, he began writing Summa Theologica, his most famous work, as well as other writings.

By 1269, he was back teaching at the University of Paris, where he confronted radical Averroism—philosophies derived from an Arab philosopher that covered Aristotle—and other subjects, from philosophy and theology to math, psychology, medicine, physics, and law. Aquinas' writings, including the Summa Theologica, on which he continued to work until shortly before his death, largely are a response to Averroism and radical Aristotelianism.

In 1272, Thomas Aquinas left Paris to establish a university in Naples, as requested by the Dominican Order to which he belonged. He reportedly had an experience with God there that led him to stop writing and devote his energy to reconciling the Roman and Orthodox churches. He was apparently was trying to do that when, on his journey, he suffered a series of accidents and illnesses that resulted in his death in 1274.

In his lifetime and shortly after, Thomas Aquinas received support from Popes Innocent IV and Urban IV and opposition from the bishop of Paris, Etienne Tempier, who excommunicated some of those who followed Thomas Aquinas' teachings.

But, since then, his writings have become so influential among Roman Catholics that, in the early 20th century, Pope Benedict XV said that the Roman Catholic Church had adopted Thomas Aquinas' doctrines as their own.

Pope John  XXII, in the early 14th century, declared him a saint. In the 15th century Pope Pius V declared him a "Doctor of the Church." Anglicans, Roman Catholics, and Lutherans remember him every year on January 28.

There seems to be evidence that he cared about the truth and about God, as shown in his dedication to preaching and teaching over political gain for himself. He also is reported to have said, when asked by Christ in a vision what he desired, "Only you, Lord." On his death bed, he said, "I receive thee, ransom of my soul. For the love of thee have I studied and kept vigil, toiled, preached and taught..." And the fact that his heart turned toward unity with the eastern churches also seems to point that way.

Unfortunately, he was drawn into the pattern of arguing doctrine and leaning on human understanding, instead of God's commands, that had become the common method of teaching centuries before, instead of spending his time insisting that disciples demonstrate the life of Christ, as the apostolic churches had.

Thomas Aquinas also took the view (Summa Theologica, second part of the second part, question eleven, article three), that anyone branded a "heretic" by the Church should be put to death if they failed to repent, in opposition to both the teachings and the example of Jesus and the Apostles.

The Satisfaction View of Atonement

Maybe one of the most widely known and lasting legacies of Thomas Aquinas is his contribution to the dialogue on what God accomplished by the sacrifice of Jesus, a subject referred to as, "the atonement." Aquinas' theory is intrinsically important to modern Catholics and important to evangelicals and other Christians, especially in the west, because of its influence on the writings of John Calvin and his followers.

Calvin's version of the satisfaction theory, penal substitution, deeply pervades protestant theology to the point that tradition has made some version of it largely a test of orthodoxy in western thought, though it never was for the 1500 years of church history before Calvin.

More than 100 years before Thomas Aquinas, Anselm of Canterbury, dissatisfied by the Early Church Fathers' explanation (often called the ransom, or Christus Victor, theory of atonement), finding it "irrational" that Christ's death could be paid by God as a ransom to Satan in order to secure our freedom, came up with what was the beginning of a succession of "satisfaction theories of atonement."

His thoughts were that we all owe God a debt of honor to live without sin, and that, when we sin, we create a blemish on God's honor, which has to be rectified. Since God's honor is divine, it can only be rectified by the divine Son paying the debt to his Father with his life.

This seems to portray God the Father as being full of pride, worrying about his honor, placing it over the life and torture of his Son, when the truth is that—if the Father is accurately represented by Jesus as we believe—the Father makes himself of no reputation for our sakes, preferring to show his love and give honor to the Son, who, in turn, seeks no glory for himself, but gives all glory and honor to the Father.

Thomas Aquinas, not satisfied with Anselm's arguments, decided to answer him in his Summa Theologica in a long, involved discussion that is hard to condense. Aquinas' take seems to be that sin requires punishment in order to set it right and that Jesus was sent to be tortured and die in order to balance the account for men or to return "order" to his "justice."

Does this mean that the Father was forced to promote the torture and death of his son in order to balance some sort of math problem?

He went on to include his thought that we could pay the moral debt of our own sin by purposely experiencing pain equal to our pleasure derived from sin (penance), but that Christ had to pay the debt for our "original sin" that we inherited from Adam and Eve, which resulted in a loss of a divine empowerment or "supernature" that had previously allowed humans to overcome their natural ways.

According to Aquinas, it seems that the way we partake of Christ's merits and receive salvation is through the "sacraments" of the Roman Catholic Church (like infant baptism, confession, communion, confirmation, marriage, and last rites).

Then along came Calvin. A couple centuries later, reformer John Calvin and his followers, influenced by Thomas Aquinas, also tried to explain the mechanics of the atonement, changing moral imbalance to crimes, cutting away penance, and substituting predestination for free will.

The result is the doctrine of penal substitution, where mankind is totally evil, has no ability to choose God, and are cosmic criminals, sentenced to death at birth. That is, except for a few God has chosen to save by sending his Son to die in their place, which placates God's wrath and gets them to Heaven.

This seems to effectively relegate the Father to the role of a mean, angry legal functionary who either can't or won't forgive men without carrying out his wrath on his kind, innocent Son, and that he is randomly exclusive in choosing who to torture in a fire pit forever.

If we have to accept one of these models, exclusively, for understanding in what way Jesus' death "atoned" for us, I suggest the early church model, since they were closest to Jesus and the Apostles and because they had the fruit of of love and unity.

For a deeper discussion of the atonement in Scripture and history, see Substitutionary Atonement.

If you would like to read some of Aquinas' writings for yourself, you can find the Summa Theologica and other writings of Thomas Aquinas online at Christian Classics Ethereal Library. Reading original writings, rather than depending solely on evaluations from others is a good practice, especially if the subject of inquiry seems important enough to need to accurately determine the truth.