Orthodoxy:
An Ironic Side Note on Heresy, and the Trinity

This page won't make much sense if you didn't come here from The Trinity: Development, Doctrine, and Definition. 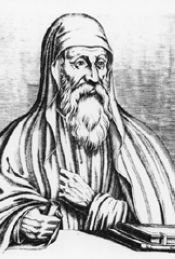 Tertullian is considered the height of orthodoxy on the matter of the Trinity. As you have seen, however, he believed that the Son was begotten of God in eternity past, in some manner that is peculiar to God. He also believed that before that birth, which happened before anything else was created, that God was alone.

The modern version of the Trinity, as found in the Athanasian Creed and invented in the 4th century, doesn't really have room for this. "The Father is eternal; the Son is eternal; the Holy Spirit is eternal; yet there are not three Eternals, but one."

But Tertullian's orthodoxy is never questioned.

Origen, on the other hand, writing just a couple decades after Tertullian, is often castigated as unorthodox, if not downright heretical. He was censured by a Church council a couple centuries after he died.

An Example of the Irony

Robert Bowman, a noted defender of modern "orthodoxy," writes, "Origen believed that the Son was eternal and uncreated, and he definitely regarded the Spirit as a person. But, like the Witnesses, he regarded the Son as a second, inferior God next to Almighty God."

This inaccurate accusation could be levied at Tertullian as well. He writes:

The Father is the entire substance, but the Son is a derivation and portion of the whole, as he himself acknowledges, "The Father is greater than I." In the Psalm his inferiority is described as being a little lower than the angels. Thus the Father is distinct from the Son, being greater than the Son. (Against Praxeas 9)

In John 14:28 Jesus says the Father is greater than he is. This was commonly and unashamedly quoted by early Christians, who all gave the same reason for Jesus' statement. God is and must be greater than his Word because the whole is greater than the part.(This will be addressed further down the page.)

But it's Origen, not Tertullian or any others, who is reprimanded for unorthodoxy, despite holding what is simply the Nicene view of the Trinity.

Origen was an unusual thinker, and he did have some wild ideas. His views on the Trinity, however, were not among them.

Origen was actually closer to the modern view of the Trinity than Tertullian was. Origen loved to think about things like eternity and time. To Origen, if the Son was begotten in eternity past, then he was always begotten. There was no "time" when the Son was not yet begotten, nor a "time" when God was alone.

Origen, as I said, had other wild ideas, so his writings come under closer scrutiny than Tertullian's. Though they taught the same things about the Trinity, it is Origen whose orthodoxy is questioned. Tertullian, who could be quoted in exactly the same ways, is left alone.

All the while we quote the Nicene (and Apostles) Creed, never knowing that we neither understand nor believe its doctrine of the Trinity—and condemn Origen with it!

Return to The Trinity: Development, Doctrine, and Definition