An Early Christian Quote
Of the Gospel of Thomas

Yesterday I made the most fascinating discovery. Before I wrote this page, I read the Gospel of Thomas and some introductions to it that attempted to date it.

Not one of them mentioned that the Gospel is quoted in 2 Clement!

Yesterday I read, "For the Lord himself, being asked when the kingdom would come, replied, ‘When two shall be one, that which is without as that which is within, and the male with the female, neither male nor female’" (2 Clement 12).

This is clearly a quote from the Gospel of Thomas, saying 22, which reads:

They said to him, "Shall we then, as children, enter the Kingdom?"

Now, I complain about this quote on my original page on the Gospel of Thomas. It could be interpreted to be anything. 2 Clement interprets it this way:

Implications for the Orthodoxy of the Gospel of Thomas

2 Clement is considered an orthodox work; however, no reputable scholar has ever considered it to be actually written by Clement, not even Eusebius, who makes the first mention of it in A.D. 323. In style, it is nothing like 1 Clement. It is only called 2 Clement because the 5th century Alexandrian manuscript includes it with 1 Clement as "the epistles of Clement."

Despite the fact that no one believes Clement authored it, it's universally considered orthodox. In fact, it's pretty awesome, and you ought to read it (but see sidebar).

A Warning About Reading
2 Clement

If you believe in eternal security, Second Clement may offend you greatly.

Like every Christian in history before the 16th century, I don't believe in eternal security. Martin Luther didn't, either. (Surprise! See the Martin Luther quotes on the Eternal Security quotes page.)

As I said on the original page on this gospel, I didn't find anything out and out anti-Christian. It just has that eastern mystical feel and has changed some of Jesus' sayings into philosophical claptrap that could mean anything. If the writer of Second Clement could interpret them the way he did above, then it's no surprise that he could consider it orthodox.

Overall, it seems likely that the Church knew about this gospel that claims to be from Thomas, yet they did not include it with Matthew, Mark, Luke, and John among the accepted Gospels, and they did that on purpose.

Implications for the Dating of the Gospel of Thomas

2 Clement is usually given a date from A.D. 140-160, specifically because of this quote.

No Christian writer before Eusebius in A.D. 323 makes reference to 2 Clement; however, the reason for dating it to c. A.D. 150 is that it quotes words of Jesus from something other than the four Gospels. That would have been unacceptable in an orthodox work, especially a sermon like Second Clement, anytime after the late 2nd century. 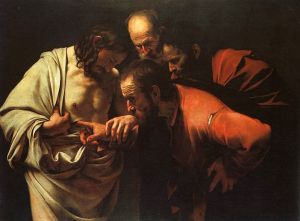 "The Incredulity of Saint Thomas"
by Caravaggio, 16th-century Italian artist
(Lifelike, isn't it?)

In a book called Thomas and the Evangelists, H. Montefiore and H.E.W. Turner suggest possible sources from which the Gospel of Thomas might be quoting:

If the hypothesis that Thomas is not dependent on the Synoptic Gospels is examined, the existence of other sources containing material similar to the canonical Gospels must be investigated. What sources would have been available to a writer between AD 150 and 200? The Gospel to the Hebrews was certainly in existence by the earlier date. Only fragments of this Gospel are extant. [The author say the Gospel of the Hebrews is quoted in Irenaeus, Against Heresies Bk. I, ch. 26, par. 2 and Bk. III, ch. 11, par. 7, but I was unable to find a reference to the Gospel of the Hebrews in either.] It is interesting that Clement of Alexandria on one occasion cites an agraphon [saying of Jesus] as though it belonged to Scripture [Stromata Bk. 5, ch. 14; search for "reign" on the page, and it will take you to the bottom of the 10th paragraph; I do not agree Clement treats this as Scripture], while on another occasion, he quotes the same agraphon in a slightly different form, giving the Gospel to the Hebrews as its origin [Stromata Bk. 2, ch. 9 is given in the text; the reference is at the end of the chapter. and I did find this at the end of the chapter]. This agraphon (again in slightly different forms) can be found both in the Oxyrhynchus fragment of Thomas and in the Coptic manuscript of the Gospel [and only in those two; for example, this English translation of the Gospel of Thomas does not have the saying]. It is therefore extremely probable that Thomas did make use of the Gospel of the Hebrews.
Thomas also has affinities to the Gospel of the Egyptians. This also was in existence before the end of the second century, for Clement of Alexandria quotes from it [Stromata Bk. 3. ch. 9; scroll down to find Chapter IX, and the quote is at the beginning]. Another citation of Clement has its counterpart in the Gospel of Thomas [Stromata Bk. III, ch. 13; scroll down to Chapter XIII in the previous link, and it is in the middle of the chapter; this one is similar to the passage in the Gospel of Thomas], and although it is difficult to determine the precise relationship here between Thomas and the Gospel to the Egyptians, it is probably that the former made use of the latter. Both were current in Egypt. (Brackets are my comments and links; parentheses are from original author.)