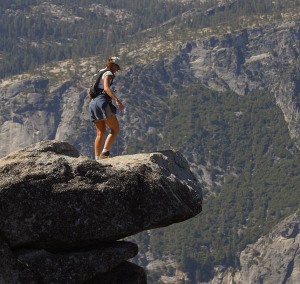 Quotes about eternal security from throughout Christian History.

Do not err, my brothers. Those that corrupt families shall not inherit the kingdom of God. If, then, those who do this in regard to the flesh have suffered death, how much more shall this be the case with anyone who corrupts the faith of God, for which Jesus Christ was crucified, by wicked doctrine? Such a person, becoming defiled, shall go away into everlasting fire and so shall everyone that listens to him. (Letter to the Ephesians 16)

Pray also for me, for I need your love along with the mercy of God so that I may be worthy of the duty for which I am destined and so that I will not be found reprobate. (Letter to the Trallians 12)

We take earnest heed in these last days, for the whole time of your faith will profit you nothing unless now, in this wicked time, we also withstand coming sources of danger, as befits the sons of God. (Letter of Barnabas 4)

Each person will receive as he has done. If he is righteous, his righteousness will precede him. If he is wicked, the reward of wickedness is before him. Take heed, lest resting at our ease as those who are the called ones, we should fall asleep in our sins, and the wicked prince should acquire power over us and thrust us away from the kingdom of the Lord. Consider this all the more, brothers, when you reflect and see that after such great signs and wonders were done in Israel, they were abandoned. Let us beware, lest we be found as it is written, "Many are called, but few are chosen" [Matt. 22:14]. (Letter of Barnabas 4)

Let us, then, not only call him Lord, for that will not save us. For he says, "Not every one that says to me, 'Lord, Lord,' shall be saved, but he that does righteousness." Therefore, brothers, let us confess him by our works, by loving one another, by not committing adultery, speaking evil of one another, or cherishing envy; but being continent, compassionate, and good. … By such  works let us confess him, and not by those that are of an opposite kind. It is not fitting that we should fear men, but rather God. For this reason, if we should do such wicked things, the Lord has said, "Even if you were gathered together to me, into my very bosom, yet if you were not to keep my commandments, I would cast you off and say to you, 'Depart from me. I do not know where you are from, you workers of iniquity.'" (2 Clement 4)

Let us, then, repent with our whole heart, that none of us may perish needlessly.  For if we have commands and [if we] engage in withdrawing from idols and instructing others, then how much more should we not perish because we already know God.

Let us therefore help one another and lift up the weak in what is good so that all of us may be saved, convert, and admonish one another.

Let us not only seem to believe and pay attention when we are admonished by the elders, but let us also remember the commandments of the Lord when we return home. Let us not be allured away by worldly lusts, but let us draw near to one another very often in order to try to make progress in the Lord's commands. In this way, when we all have the same mind, we will be gathered together for life, for the Lord said, "I come to gather all nations and languages."

This refers to the day of his appearing, when he will come and redeem us—each one according to his works. The unbelievers will see his glory and might, and when they see the empire of the world in Jesus, they will be surprised. They will say, "Woe to us, because you were, and we did not know you, did not believe, and did not obey the elders who clearly explain our salvation."

"Their worm shall not die, nor shall their fire be quenched, and they shall be a spectacle to all flesh" (Is. 66:24).

He speaks of the great day of judgment, when they shall see those among us who were guilty of ungodliness and erred in their estimate of the commands of Jesus Christ.

The righteous will have succeeded both in enduring the trials and hating the indulgences of the soul. They will give glory to God when they witness how those who have swerved and denied Jesus by words or deeds are punished with grievous torments in unquenchable fire. They will give glory to their God and say, "There will be hope for him who has served God with his whole heart." (Second Clement 17)

If they repent, all who wish for it can obtain mercy from God, and the Scripture foretells that they shall be blessed, saying, "Blessed is the man to whom the Lord will not impute sin" [Ps. 32:2]. That is, he repents of his sins so that he may receive remission of them from God. It is not as you deceive yourselves, along with others who resemble you in this, and say that even though they are sinners, but know God, the Lord will not imput sin to them. We have as proof of this the one fall of David, which happened because of his boasting, which was forgiven when he mourned and wept in the way it is written. If even to such a man no remission was granted before repentance and only when this great king, anointed one, and prophet mourned and conducted himself as it is written, then how can the impure and utterly abandoned, if they do not weep, do not mourn, and do not repent, entertain the hope that the Lord will not impute sin to them? (Dialogue with Trypho 141)

"He that does not know God," [the angel of repentance] answered, "and practices evil, receives a certain chastisement for his wickedness, but he that has known God ought not to do evil anymore but to do good. If, accordingly, when he ought to do good, he does evil, does he not appear to do greater evil than the one who does not know God? For this reason, those who have not known God and do evil are condemned to death, but those who have known God and have seen his mighty works and still continue in evil shall be chastised doubly and shall die forever. This is the way the Church of God will be purified." (Shepherd of Hermas III:9:8)

We … ought ourselves to fear, lest by chance, after the knowledge of Christ, if we do things displeasing to God, we obtain no further forgiveness of sins, but be shut out from his kingdom. (Against Heresies, IV:27:2)

[Irenaeus quotes 1 Cor. 6:9-10 here about inheriting the kingdom of God.] It was not to those who are outside that he said these things, but to us, lest we should be cast out of the kingdom of God by doing any such thing. He proceeds to say, "And truly such were you, but you are washed, but you are sanctified in the name of our Lord Jesus Christ and by the Spirit of our God" [1 Cor. 6:11]. And just as [under the old covenant], those who led vicious lives and led other people astray were condemned and cast out, so also even now the offending eye is plucked out, and the foot and the hand, lest the rest of the body perish in the same way. (Against Heresies, IV:27:4)

41. ... these were the apostles, who after (receiving) the power of the Holy Spirit were sent forth by Him into all the world ... showing to mankind the way of life, to turn them from idols and fornication and covetousness, cleansing their souls and bodies by the baptism of water and of the Holy Spirit; which Holy Spirit they had received of the Lord, and they distributed and imparted Him to them that believed ... By faith and love and hope they established ... that to those who thus believed in and loved the Lord, and continued in holiness and righteousness and patient endurance, the God of all had promised to grant eternal life by the resurrection of the dead; through Him who died and rose again, Jesus Christ ... And they counseled them by the word of truth to keep their flesh undefiled unto the resurrection and their soul unstained.

42. For such is the state of those who have believed, since in them continually abides the Holy Spirit, who was given by Him in baptism, and is retained by the receiver, if he walks in truth and holiness and righteousness and patient endurance. For this soul has a resurrection in them that believe, the body receiving the soul again, and along with it, by the power of the Holy Spirit, being raised up and entering into the kingdom of God. (Proof of the Apostolic Preaching, 41-42, c. 170-190)

Vain then is the labor of the righteous man, and free from blame is the way of the sinner if a change come to pass, and the former turn from the better to the worse and the latter from the worse to the better. So we hear from Ezekiel ... when he says, "If the righteous man turns away and commits iniquity, I will not remember the righteousness which he did before. In his sin he shall die." And so, too, about the sinner: if he turns away from his wickedness and does what is right, he shall live. (Epistle 42 as numbered by The Ante-Nicene Fathers, published by Eerdmans and Hendrickson.)

Vain then is the labour of the righteous man, and free from blame is the way of the sinner, if a change befall, and the former turn from the better to the worse, and the latter from the worse to the better. So we hear from Ezekiel teaching as it were in the name of the Lord, when he says, “if the righteous turneth away and committeth iniquity, I will not remember the righteousness which he committed before; in his sin he shall die,”2063 and so too about the sinner; if he turn away from his wickedness, and do that which is right, he shall live. (Letter from St. Basil of Caesarea to Chilo, his disciple.  Basil 42:2)