The Gospel of Mary Magdalene

"The Gospel of Mary Magdalene" is not titled. We don't even have the first four pages of the manuscript in its most complete form (a codex discovered in 1896). There is a Mary mentioned it, and it seems obvious that it's Mary Magdalene, but we can't know that. There are some who argue that it is Mary, Jesus' mother.

So this gospel is also titled "The Gospel of Mary."

The Coptic manuscript found in the Berlin Gnostic Codex is the largest fragment we have. Two other small fragments have been found, written in the original Greek, at Oxyrhynchus, an Egyptian town with a fascinating history. It was abandoned in the 6th century, but its dump was preserved by the arid Egyptian desert. That dump has yielded incredible historical information, including some gnostic texts.

The Greek manuscripts date from the 3rd century, so the Gospel of Mary is at least that old.

One feminist historian argues that the Gospel of Mary Magdalene was written during the time of Christ, but that can only be biased guesswork. It is extremely unlikely that a gospel was written in Greek during Christ's lifetime, before the apostles or Mary were famous, and disagreeing with the only Gospels known to have been written in the first century. 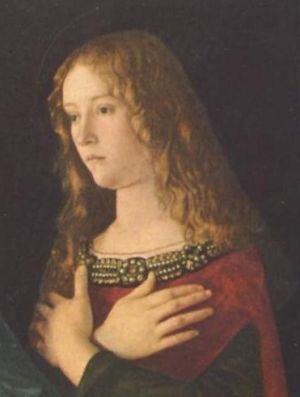 Much more likely is that it was written after the fame of the apostles—four of them are mentioned—and Mary Magdalene had spread out of Judea.

There's not a lot of content to the Gospel of Mary Magdalene. It's quite short. It was likely written to emphasize Mary's superiority to the apostles.

Chapter five has the following statement by Peter:

Sister, we know that the Saviour loved you more than the rest of woman. Tell us the words of the Savior which you remember which you know, but we do not, nor have we heard them.

Andrew, according to the Gospel of Mary, adds:

If the Savior made her worthy, who are you [i.e., Peter] to reject her? … That is why he loved her more than us. Rather let us be ashamed and put on the perfect Man.

The gnostics were always looking for a source for their tradition that was outside the apostles. Their gospels, which were all almost certainly written after the first century, were generally written to provide some apostolic or extra-apostolic authority.

Outside of these sorts of things, there are typical gnostic sayings; cryptic, seemingly paradoxical, and of little or no practical value. The Gospel of Mary Magdalene is admittedly much better than the other gnostic literature I've seen, however.

As with the Gospel of Thomas, I can't give you the whole text because I don't know if there's a public domain translation; however, you can read the whole text at gnosis.org.

Examples and Excerpts from the Gospel of Mary Magdalene

Here's an example of what I mean. Due to missing pages, this section comes to us with no introduction. "The soul" meets three powers, the second of which is desire. The first power is missing (but may be darkness). Now, the soul encounters the third power, ignorance.

We take up from the beginning of their conversation.

The power questioned the soul, saying, Where are you going? In wickedness you are bound. But you are bound; do not judge!

When the soul had overcome the third power, it went upwards and saw the fourth power, which took seven forms.

This at least can somewhat be understood, unlike the few bizarre sayings in the Gospel of Thomas and the many in the Pistis Sophia. The seven forms of the fourth power are darkness, desire, ignorance, excitement of death, kingdom of the flesh, foolish wisdom of the flesh, and wrathful wisdom. They are also called "the seven powers of wrath."

The idea that the soul must overcome these things is at least an understandable, reasonable thought.

The rest of the Gospel of Mary Magdalene that is in our possession concerns the nature of matter, addressed in cryptic terms, and the primacy of the mind over other virtues. For example, the Lord tells Mary  that a vision is not seen through the soul or spirit, but through the mind.

He also tells her, "For where the mind is, there is the treasure" (emphasis mine). This is in contrast with Matthew 6:21, which tells us that treasure will draw the heart.

The Savior, in the Gospel of Mary, also tells us that there is no sin! He then adds, "It is you who make sin when you do the things that are like the nature of adultery, which is called sin."

While not as bad as the Pistis Sophia, this can be interpreted many different ways. Gnostics liked to write things that were difficult to pin down.

On the other hand …

Is It Really Gnostic?

Not everyone agrees the Gospel of Mary Magdalene is gnostic. The primary doctrine that can identify gnostic literature is the rejection of the material creation as evil. There's no indication of this in the text as we have it.

There are opportunities for it to be there. For example, the Savior says:

All nature, all formations, all creatures exist in and with one another, and they will be resolved again into their own roots. For the nature of matter is resolved into the roots of its own nature alone.

He says this in response to the question: "Will matter then be destroyed or not?"

The answer has that gnostic cryptic flavor; it can be interpreted just about any way you want to interpret it. However, it is not a direct attack against all matter as evil, and that, as I said, is a key distinguishing gnostic belief.

Either way, the Gospel of Mary Magdalene is clearly not Christian, as it exalts Mary over the apostles, gives a definition of sin that is contrary to apostolic teaching, and is lacking that practical, detailed call to obeying God that marks all early Christian literature.