Early Christianity:
A Brief Overview of the Ante-Nicene Era

The Council of Nicea in A.D. 325 is a natural time to end "early Christianity," the post-apostolic period. Almost every history book will refer to the period from A.D. 100, which is about the time of John the apostle's death, to A.D. 325 as the "Pre-Nicene" or "Ante-Nicene" era.

An icon of the Council of Nicea
which marked the end of "early Christianity."

Nicea serves as a dividing line because the emperor Constantine, though never becoming a Christian until his deathbed, greatly favored Christianity during his reign. As a result, the number of Christians increased from about 10% of the empire to about 90%.

Most of these converts were simply following the emperor, not submitting themselves to Jesus. The effect on early Christianity was dramatic.

But the description of the dramatic change must wait for the next section. Here we are concerned with the era before Nicea.

Unity and Apostolic Truth in the Early Christianity

If I have to pick the outstanding feature of this era, then I choose the independence of the churches. People like to say that a hierarchy began to form before Nicea. It began in the 3rd century, but not in the 2nd.

Men like Tertullian (c. A.D. 200) and Irenaeus (c. A.D. 185) were able to present the unity and agreement of the apostolic churches as proof that they were still holding to apostolic truth, which they liked to call the apostolic tradition.

They both referred to apostolic succession (the succession of bishops and elders in the churches) as evidence that the preaching of the apostles was handed down unchanged until their day.

Such arguments would not be effective if there was a pope or overarching Church hierarchy in early Christianity that could dictate doctrine to all churches.

Tertullian's argument was that so many churches would never all go astray into the same error. Their unity was proof that they were still holding to the traditions of the apostles, not something new. If new things had been introduced then the churches would have many competing new truths.

The ante-Nicene churches were simple and free. They found their unity in wholehearted devotion to Christ, not in a systematic theology or set of doctrines.

Since our persuasion by the Word … we who formerly delighted in fornication now embrace chastity alone; we who formerly used magical arts dedicate ourselves to the good and unbegotten God; we who valued above all things the acquisition of wealth and possessions now bring what we have into a common stock and share with everyone in need; we who hated and destroyed one another … now, since the coming of Christ, live familiarly with them, pray for our enemies, and endeavour to persuade those who hate us unjustly to live conformably to the good precepts of Christ, to the end that they may become partakers with us of the same joyful hope of a reward from God the ruler of all. (Justin Martyr, First Apology 14)

A more complete description of these things along with numerous other quotes from the period can be found in the Pre-Nicene era section.

Holiness in the Early Churches

The other notable thing about this era was the holiness of the early churches. Christians were still subject to intermittent persecution in the early Christianity. As a result, those who chose to follow Christ were those willing to commit everything to the kingdom of God. It could cost them their lives! 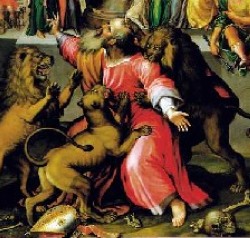 Martyrdom of Ignatius of Antioch

Holiness and perseverance lessened as the 3rd century wore on; however, the remarkable lives of Christians during the 2nd century—their deep love for one another and their endurance during persecution—were powerful testimonies to the Romans around them.

By the 3rd century, Christianity was becoming popular.

The result was that there were Christians who were not so separated from the world as others before them. Tracts can be found calling Christians to separate from Roman entertainment and other worldly pursuits.

Christians that fell away during persecution but later wanted readmittance to the Church also became a problem, and it led to numerous debates and a large split in the mid-3rd century, led by a Roman elder named Novatian.

It is worth noting that unlike the apostolic era, Ante-Nicene Christianity had no famous evangelists or apostles. When Justin Martyr describes those converted to Christianity in the mid-2nd century, he says it was caused by:

Tertullian says that new churches were being raised up every day in early Christianity, and he, too, attributes it to the lives of Christians, saying, "The oftener you mow us down, the more of us there are. The blood of Christians is seed" (Apology 50).