Why I Love SBI

I don't spend much time selling on this site, but my web host put up a new article about their services that explains exactly why I use them.

The following image shows the web traffic for one month for each of the sites I own. 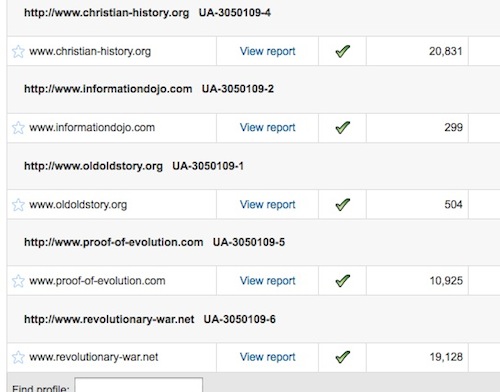 I host three web sites with Solo Build It. Can you guess which ones they are?

OldOldStory.org is the oldest of my sites. Back in 2008 I decided to study search engine optimization and find out how to get more readers. At the time, my monthly traffic was around 300 visitors.

After four months of study, over $300 in purchases of "greatly discounted" books and tools, and hundreds of hours of hard work, I doubled my monthly visitors to 600. Exhausted, I just couldn't do it anymore.

For the most part, I have let the site sit ever since. After over three years, as you can see, it has simply settled in. Last month, it got 504 visitors.

Towards the end of my four months of research I ran across Solo Build It. They promised not only to host a site for me, but to walk me through the entire process of building it. They provided exact, step-by-step instructions for how to draw traffic, provided every research tool I needed for free, and then examined each and every page for its ability to be noticed by search engines as it went up.

Shoot, they even taught me how to write for a world wide web audience!

In February, 2009, I purchased a year's subscription (all the tools and help were free, no additional costs) and began building Christian-History.org. Four months into the process I was getting 1,200 visitors per month, twice what I had been getting at Oldoldstory.org. A year later, it was 5,500, nearly five times the previous year. As you can see, 18 months since then, I am now sitting at over 20,000 visits per month, forty times what my other old sites are getting.

Proof-of-Evolution.com and Revolutionary-War.net are two newer sites that have not received anywhere near the work that Christian-History.org has gotten. Nonetheless, both dwarf my old sites in traffic.

Further all three of my Solo Build It sites have increased in traffic even when I have let them sit. (This is because they're properly built, no details missed, because of the step-by-step guidance of Solo Build It. All I had to do was write with passion on subjects I enjoy.)

If you're looking for an online business, traffic is the key. Think of the difference between a store on a busy sidewalk in the city versus one sitting on a back road in the countryside.

Most web sites and blogs languish with no attention. Some may get a little attention the way my old sites did. At Solo Build It, the results I'm gettting are normal. Two-thirds of Solo Build It sites make it into the top 3% of web sites in traffic. (Alexa ranks over 60 million web sites the last time I checked. These are my Christian-history.org rankings.

Solo Build It crunches some of those numbers for you, and they can explain exactly why their simple system works.

The numbers above mean that more than 500,000 people—yes, that's half a million—will read my web sites in 2012. About 100,000 of those will be reading the writings of my daughter, a sixteen-year-old who has written about half of Revolutionary-War.net.

For those of you who are writers, how would you like to have those numbers reading the things you've written?

For those of you that are entrepreners, how would you like to have a half million people milling around in your lobby, and what could you do with that kind of traffic?

Yes, I get a commission if you sign up for Solo Build It after visiting this page. But there's not a number on this page that is made up or exaggerated. It seems positively sinful not to let you get the same benefit I've had.

Oh, I should answer the question that would be bugging me. There is no catch to Solo Build It except hard work. They have no upsell. In fact, every premium service that they used to offer is now free. Your very reasonable web hosting fee is all you pay, and they have a money back guarantee!

In fact, it almost seems like we're taking advantage of Solo Build It. See if I'm not telling you the truth.

What have you got to lose except the sound of crickets at your web site or blog's front door?