When Did the Roman Catholic Church Begin?

How and when was there a Roman Catholic Church? Once you know the story of the church, the rise of Roman Catholicism is easy to understand. 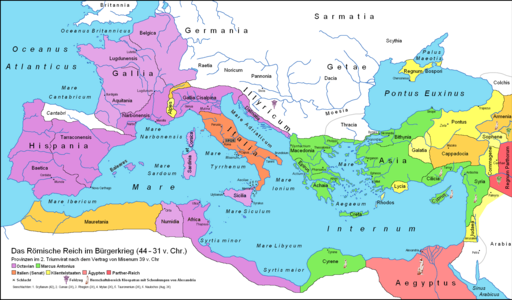 Most of the apostolic churches that we know anything about were founded in the eastern half of the Roman empire. The green sections on that map—Asia, Macedonia, Achaia, Cilicia, and Syria—contain Corinth, Ephesus, Philippi, Colossae, and Thessalonica. You can see the Galatian churches are right next to Asia. Even the additional churches which received letters from Jesus in the Book of Revelation (chs. 2-3) are all found in or around that green area marked Asia.

The lone exception mentioned in the apostles' writings is Rome. It sits far to the west of all the others.

Later Christian writings discuss churches in Edessa, Syria (founded by Thaddeus, one of the 70, not the apostle), in Alexandria, Egypt (founded by Mark), and in Carthage (modern Tunis, Tunisia).

The Authority of the Apostles

For the early churches, the apostles were the final authority on everything:

Since the Lord Jesus Christ sent the apostles to preach, [our rule is] that no others ought to be received as preachers than those whom Christ appointed; for ‘no one knows the Father except the Son, and him to whom the Son wishes to reveal him’ [Matt. 11:27]. Nor does the Son seem to have revealed Him to any other than the apostles, whom he sent forth to preach. (Tertullian, Prescription Against Heretics 21, c. AD 210)

We have learned from no one else the plan of our salvation, than from those through whom the Gospel has come down to us, which they proclaimed at one time in public, then, at a later period, by the will of God, handed down to us in the Scriptures, to be the ground and pillar of our faith. (Irenaeus, Against Heresies III:1:1, c. AD 185)

Therefore, when some dispute arose among churches, they were quick to seek out churches founded by an apostle, in case the apostle had left some instruction on the matter under dispute.

Suppose there arise a dispute relative to some important question(2) among us, should we not have recourse to the most ancient Churches with which the apostles held constant intercourse, and learn from them what is certain and clear in regard to the present question? For how should it be if the apostles themselves had not left us writings? Would it not be necessary, [in that case,] to follow the course of the tradition which they handed down to those to whom they did commit the Churches? (ibid. III:4:1)

Authority of the Bishops

Although the pattern in Scripture is leadership by a group of elders, by the mid-second century all churches had one elder who was the bishop (lit. overseer or supervisor). Because of the importance of the apostolic churches, the bishops of those churches became very respected and sought out.

Unfortunately, except Antioch, which managed to maintain its importance as an apostolic church, the churches that really grew in importance were the ones in big or in imperial cities. Thus, both the bishop of Rome and the bishop of Alexandria exercised wide influence throughout the third century, Rome in the west and Alexandria in the east.

By the fourth century, the Council of Nicea would affirm the authority of the Alexandrian and Roman bishops over their surrounding areas (Canon 6). "Antioch and the other provinces" are said to "retain their privileges," which implies that the bishops of Antioch and other major churches had authority to become bishop of whole provinces.

A few years later Constantinople was built, and its bishop was added to the most important bishops.

By this time, in the fourth century, the authority and the breadth of the rule of a bishop was at least as tied to the imperial authority of the city as it was to the founding of the church in that city by an apostle.

The Rise of the Roman Catholic Church

So how did Rome's authority eventually expand to the whole world?

Well, the truth is, it never has. The east has never recognized the authority of the Roman bishop (the Pope). In the west, however, it was simply inevitable.

Eastern View of the Roman Bishop

While the east never recognized the Roman bishop as a supreme authority, from at least the fourth century on, he was acknowledged as "first among equals." Since the Great Schism, however, the Orthodox Churches see the pope as a schismatic who can have no authority until he repents.

Surprisingly enough, the rise of the Roman Catholic church depended on the fall of Rome.

In the 5th century, the city of Rome fell to Barbarian invaders. The last emperor to reign from Rome was deposed in 476. The Roman empire did not fall, only the western half fell. Basically, if you look at the map again, everything in green and east remained under the rule of the emperor in Constantinople until the 15th century, when the Turks finally toppled the Roman empire (though it had ceased to be "Roman" a millennium before).

A look at the map will reveal that the only church known to be formed by the apostles in the western half of the Roman empire was Rome. No more competition from Constantinople, Antioch, or Alexandria. The bishop of Rome, though he maintained relationship with the emperor and the bishops in the east, was the highest, most respected ecclesiastical authority in the Germanic kingdoms.

Protestant theologians usually suggest that Pope Gregory the Great, who ruled from AD 590-604, was the first to really have papal powers, so that even kings sought his approval and blessing. Dr. Brendan McGuire, a Catholic historian, has a great series of lectures on the medieval papacy, and he agrees that Pope Gregory was the first to have what the Roman Catholic Church envisions as papal primacy.

Return to Questions and Answers