Fall of the Church 4:
Pope Damasus I and the Antipope Ursicinus

Pope Damasus I (366 – 384) began his reign after the death of Pope Liberius in September of 366 and he continued until 384. He did not gain his position, however, without much struggle.

This page on Pope Damasus I is also part 4 of my Fall of the Church series. The other parts are:

Political Power of the Roman Bishop

One must not underestimate the importance of the role of bishop in the 4th century. The Roman bishop had not yet achieved full papal status—such authority would have to wait at least a century—but as possibly the most powerful bishop in the empire, the throne in the Roman church was full of political power:

For such were the power and splendor of the court of the successor of the Galilean fisherman, even at that time, that the distinguished pagan senator, Praetextatus, said to Pope Damasus: "Make me a bishop of Rome, and I will be a Christian to-morrow." … These elections were as important events for the Romans as the elections of the emperors by the Praetorian soldiers had formerly been. (Philip Schaff, History of the Christian Church, vol. III, sec. 72)

All bishops had an influence in the 4th century that they could never have dreamed of in the 3rd. If ambitious and corrupt men were pursuing lesser bishoprics, you can be assured that the most ambitious were pursuing the holy see, Peter's throne.

At this point, the people of the church were still choosing their bishops with the approval of the elders and surrounding bishops. In a see this important, however, the emperor would want to approve the choice as well. His disapproval had led to the exile of Pope Liberius and a 2-year rule by the antipope Felix II (whom the historian Socrates Scholasticus says was Arian, but his contemporary Sozomen denies this). 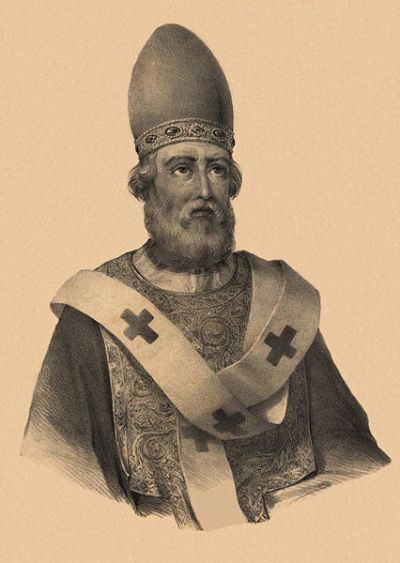 I read some conflicting reports about the election of Damasus. Sozomen and Socrates, the 5th century historians, say that the Arian doctrine had nothing to do with this election. Philip Schaff, from the 19th century, says it did, but his report has some problems with it.

Wikipedia, using respected church historian JND Kelly as its source, says that Damasus was supported by upper class, while his opponent, Ursinus, was the choice of the deacons and laity.

What seems to be consistent is this. Damasus was duly elected, but Ursicinus—moved by ambition as most likely were—got some fellow deacons to hold a clandestine election on the side. He then had some lesser bishops declare him bishop publicly.

This may be why Schaff says Arianism was involved. In the 4th century, Arian and Nicene bishops were like Democrats and Republicans in America. They were very partisan, and one could always find bishops on his side of the Arian controversy to try to push him to power. This all feels like the Arian controversy to me, and perhaps that is what motivated Schaff to suggest Arianism was involved.

Arianism was much more popular in the east, it did rear its head when the see of Peter was in question, and the conquering Germanic tribes of the 5th and 6th centuries were almost exclusively Arian, though peacefully so. (Peaceful over theology; not peaceful when they were conquering!)

It's hard to know what moved Schaff, though, as he seems to have read everything available historically; he cites a Latin author that I can't read for some of his information on Ursicinus.

Be that as it may, whatever the motivations, except for numbers, there is no doubt about what happened next …

Pope Damasus I Instituted with Violence

As was very common in the 4th century, the "church" solved the problem with violence. JND Kelly says that Damasus "hired a gang of thugs" to go after Ursicinus. I have no idea if that is true, but it must have been Damasus' side who had the upper hand because Ursicinus had to hide himself in a church building. The "Christians" battled outside until 137 people were killed. There are no numbers for the injured.

The prefect of Rome was thus obliged to quell the uprising. He decided on behalf of Pope Damasus I, and the issue, for the most part, was settled. The following year the emperor Valentinian got involved, banished Ursicinus, and Pope Damasus I was able to settle into an 18-year reign that included the final triumph of the Nicene faith—or something similar to it, anyway— under emperor Theodosius I.

Pope Damasus I was familiar with and a supporter of Jerome's Latin translation of the Bible, which would become the Vulgate, and he is also the one who introduced the Latin Psalter.

Though his enemies accused him of being a violent man, his steadfastness in defense of the Council of Nicea likely had much to do with virtually ending the Arian heresy in 383 under Theodosius (except among the Germanic tribes that would invade Italy within about 20 years).

Or return to Roman Catholicism

Or return to Fall of the Church series