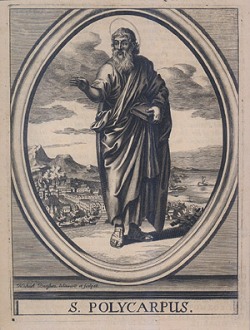 It's hard not to love Polycarp.

You already read (a little) about his martyrdom on the Early Christianity page. By then, he was 86 years old and respected by everyone. Even the soldiers who arrested him, after they heard him pray—and after he had made them a meal—regretted that they had been sent to arrest "so godly and venerable an old man."

There is some question whether Polycarp was 86 years old when he was martyred or whether he'd been a Christian 86 years. His words are, "86 years I have served him, and he never did me any injury" (Martyrdom of Polycarp 9).

Either way, there is strong tradition that he was appointed bishop of Smyrna by the apostle John. Irenaeus—later bishop of Lyons in Gaul and author of the important work, Against Heresies—has this to say on that matter:

I can even describe the place where the blessed Polycarp used to sit and converse … his general way of life and personal appearance, even the lectures he delivered to the people. I remember how he would speak of his familiar interchange with John and with the rest of those who had seen the Lord. He would call their words to remembrance, anything he had heard from them concerning the Lord, both with regard to his miracles and his teaching. What Polycarp received from the eye-witnesses of the Word of life, he would recount in harmony with the Scriptures. (Ante-Nicene Fathers vol. I; "Fragments from the Lost Writings of Irenaeus" 2)

One of my favorite stories is a very short one. He met Marcion, a unique and popular gnostic heretic one day, and Marcion asked him, "Do you know who I am." Polycarp calmly replied, "I do know you. You're the firstborn of satan" (Irenaeus, Against Heresies III:3:4).

It's always seemed unusual to me that Irenaeus, from whom we know the most about this man of God and martyr, wrote such a  huge work as Against Heresies. Irenaeus makes it clear that both Polycarp and John were quite short with heretics.

He relates, for example, that John went to the public baths in Ephesus and saw the gnostic Cerinthus there. Immediately, he rushed out of the bath house, shouting, "Let us flee, lest the bath house fall down! For Cerinthus, the enemy of the truth, is within" (ibid.).

Irenaeus indicates this was the normal mode of dealing with heretics for Polycarp:

I can bear witness before God that if that blessed and apostolic elder had heard any such thing, he would have cried out, stopped his ears, and exclaimed as he was wont to do, "O good God, for what times have you reserved me, that I should endure these things?"

Then he would have fled from the very spot where, sitting or standing, he had heard such words. (Ante-Nicene Fathers vol. I; "Fragments from the Lost Writings of Irenaeus" 2)

Irenaeus, however, far from fleeing these things, studied them and wrote a several hundred page book about them. He did so in order to correct friends like Florinus, an elder who had fallen under the sway of the gnostic, Valentinus. Nonetheless, I wonder whether it would have been wiser to follow Polycarp's pattern.

As it turns out, it was better for us that he didn't. His book preserves information about the early Christian faith, about the gnostics, and about early Christianity that we would never have known otherwise.

His Letter to Philippi

Polycarp wrote more than one letter in his lifetime, but only one survives. Irenaeus mentions there being many others:

This fact, too, can be made clear from the letters he dispatched, whether to the neighboring churches to confirm them or to certain of the brethren, admonishing and exhorting them. (Ante-Nicene Fathers vol. I; "Fragments from the Lost Writings of Irenaeus" 2)

Sadly, we have none of those, but the letter to Philippi is awesome. You can feel the depth of spirit, the balance, the wisdom, the humility and the tenderness of this great man throughout.

Mostly, it contains various exhortations. You can tell from it that the greatest work of a shepherd in the early church was to encourage the saints in faith, in holiness, and in obedience to God (see also Those Incredible Christians).

Some Doctrinal Considerations from His Letter

You'll seach in vain for answers to those questions in the writings of the Pre-Nicene (before the Council of Nicea in A.D. 325) churches. They seem to have taken all those verses in stride, completely comfortable with all of them.

The letter to Philippi is just about the best example of this:

Expressions of faith in one sentence, then works in another, are typical of both early Christian writings and the New Testament. I spent years trying to decipher the issue before The Letter of Diognetus dropped a crucial hint in my lap. My conclusions are here.

I pointed out to you earlier that Polycarp was appointed bishop by the apostle John. When I did, I included a link to my Bishops, Elders, and Deacons page.

His letter to Philippi is a fascinating testimony to the difference in leadership structure between Paul's churches and John's.

Smyrna was one of John's churches. It had Polycarp, one bishop who was basically the head of the group of elders. Philippi, on the other hand, being one of Paul's churches, should have had a group of elders that were all bishops.

He does not identify himself as a bishop in his introduction. He writes instead:

"Polycarp, and the elders with him, to the Church of God sojourning at Philippi."

Yet not only does Irenaeus identify him as  a bishop, but Ignatius addressed him as bishop in a letter written long before the letter to Philippi. So Polycarp was a bishop, leader of a group of elders, but he purposely avoids bringing that up.

Further, when he addresses the duties of church leaders, he addresses only deacons and elders, the only two offices that would have existed in one of Paul's churches (at least at this early date).

The subject is fascinating.

The Spirit of Primitive Christianity

As I said earlier, Polycarp's letter is awesome. It breathes with the spirit of early Christianity: pure, pristine, refreshing.

It's short. You ought to read it. Google it, and you'll have a choice of translations to read. It's longer than Paul's letter to the Ephesians, shorter than his letter to the Corinthians, so it's an easy—and pleasant— read.

I had more to say on reading his letter, but I moved it to a page on reading the early Christian writings.