Pliny the Younger: Epistle to Trajan

What a tremendous and fortunate insight into early Christianity has been granted to us by this letter! 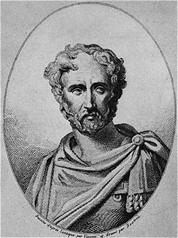 This is Pliny the Elder; I couldn't find a picture of his nephew.

All these questions are answered, or at least addressed, by this little jewel from A.D. 110.

Pliny the Younger's Epistle to Trajan

I got Pliny the Younger's letter to Trajan from the notes to Eusebius' Ecclesiastical History, book III, ch. 33. The original source is Pliny the Younger, Epistles 10.96 and 97, though I understands some sources make those letters 10.97 and 98. It is abridged and updated by me.

The epistle was written from Bithynia (on the Black Sea in modern Turkey), probably within a year after Pliny became governor there, which was in 110 or 111.

Beginning of Pliny the Younger's Epistle

It is my custom, my Lord, to refer all questions to you if I am in doubt. Who can better direct my hesitation or instruct my ignorance?

I have never been present at judicial examinations of the Christians, so I don't know how and to what extent it is customary to punish or to search for them.

Pliny the Younger's Questions to Trajan

I have hesitated greatly as to whether any distinction should be made on the ground of age, or whether the weak should be treated in the same way as the strong. Should pardon be granted to the penitent? Or is there risk that one who has always been a Christian gain nothing by renouncing it?

Should the mere name be punished, even if no crime or crimes are associated with the name?

Treatment of Christians by Pliny the Younger

There really wasn't any doubt that pertinacious and inflexible obstinacy ought to be punished no matter what they might have confessed.

There have been others afflicted with a similar insanity whom—since they were Roman citizens—I have decided should be sent to Rome.

The Forum in Rome

As commonly happens, as time has passed, the crime was extended, and many varieties of cases have appeared. An anonymous document was published containing the names of many persons. Those who denied that they were or had been Christians I thought ought to be released, after they had followed my example in invoking the gods and offering incense and wine to your image.

I ordered your image to be brought with the images of the gods for that very purpose.

I also had them curse Christ—something they say that those who are truly Christians cannot be compelled to do.

Others, accused by an informer, first said that they were Christians and afterwards denied it. They said that they had indeed been Christians, but stopped. Some said three years, some several years, and one even twenty years before.

All of them adored your image and the statues of the gods, and cursed Christ.

On top of this, they affirmed that this was the sum of their guilt or error:

They had been accustomed to come together on a fixed day before daylight and to sing responsively a song to Christ as God. They bound themselves with an oath—not to commit some crime—but, on the contrary, that they would not commit theft, nor robbery, nor adultery, that they would not break faith, nor refuse to return a deposit when asked for it.

When they had done these things, their custom was to separate and to assemble again to partake of a meal, common yet harmless (which is not the characteristic of a nefarious superstition)

Editor's note: This was very sad to read.

They stopped doing this after my edict. You had asked me to prohibit fraternities, so I did.

Because you asked this, I considered it all the more necessary to examine, even with the use of torture, two female slaves who were called deaconesses, in order to get to the truth. But I found nothing except a superstition depraved and immoderate.

Therefore, I have postponed further inquiry, and I have turned to thee for advice.

The matter seems to me to be worth consulting about, especially because of the number of people involved! Many of every age and of every rank and of both sexes have been and will be brought to trial.

The contagion of this superstition has permeated not only the cities, but also the villages and even the country districts. Apparently, though, it can be halted and corrected.

At any rate, it is certainly a fact that the temples, which were almost deserted, are now beginning to be frequented. The sacred rites, which were for a long time interrupted, are to be resumed, and the fodder for the sacrifices are being sold again.

For a while, hardly a purchaser was to be found!

It is easy to see how many can be reformed if they are given a chance for repentance.

Reply (Rescript) of Trajan to Pliny the Younger

We have Trajan's reply to Pliny!

You have followed the right course, my Secundus, in treating the cases of those who have been brought before you as Christians.

There is no fixed rule that will apply to all cases. Do not search for the Christians. If they are accused and convicted, they are to be punished.

Nevertheless, the one who denies that he is a Christian, and proves it by his act—by making supplication to our gods—can be pardoned in return for his repentance. This is true even if suspected in the past.

Anonymous accusations ought not to be admitted in any proceedings. They are of most evil precedent, and they are not in accord with our age.

Return to Trajan to Early Christianity

Or return to Christian Martyrs