These are miscellaneous Christian quotes that I didn't know how to categorize.

It was for this reason, too, that the Lord descended into the regions beneath the earth, preaching his advent there also and the remission of sins received by those who believe in him. (Against Heresies IV:27:2) 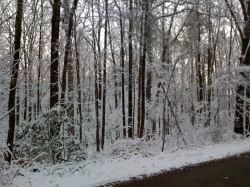 Snow in April near my home in Tennessee

Our narrative of the government of God will record in ineffaceable letters the most peaceful wars waged in behalf of the peace of the soul, and will tell of men doing brave deeds for truth rather than country, and for piety rather than dearest friends. It will hand down to imperishable remembrance the discipline and the much-tried fortitude of the athletes of religion, the trophies won from demons, the victories over invisible enemies, and the crowns placed upon all their heads. (Church History. Book V. Introduction. Par. 4.)

Some readily and very zealously engage in a good work, such as praying, reading, fasting, giving, serving, disciplining the body. But after two or three attempts they become indolent and fail to accomplish the undertaking. Their ardor subsides with the gratification of their curiosity. … The fervor that does not persevere in spiritual matters is carnal. Spiritual fervor increases with undertaking and effort. It is the nature of spirit not to know weariness. (Complete Sermons of Martin Luther, vol. IV, p. 39; "Second Sunday After Epiphany" (emphasis mine), c. 1525)

A man with God is always in the majority. (unknown)

The more we pay for any truth, the better is our bargain. (Serious Call to a Devout and Holy Life, ch. 4)

If I profess, with the loudest voice and the clearest exposition, every portion of the truth of God except precisely that little point which the world and the devil are at that moment attacking, I am not confessing Christ, however boldly I may be professing Christianity. Where the battle rages the loyalty of the soldier is proved; and to be steady on all the battle-field besides is mere flight and disgrace to him if he flinches at that one point. (The Chronicles of the Schoenberg Cotta Family; Thomas Nelson Publishers)

So much as one person with a contrary spirit to God is enough to affect all meetings - that the revival fire did not flow until that person broke and confessed, or the Lord removed him. (unknown)

The devil is a better theologian than any of us and is a devil still. (city by Revival List)

One of these days some simple soul will pick up the book of God, read it, and believe it. Then the rest of us will be embarrassed. (unknown)

Subject: death of a dream, resurrection

It seems that God often gives a dream, kills it, then gives it real life. (Slowly by Slowly)

I've seen more Christians destroyed by ambition than any other sin - discontent in the heart, always pushing and jockeying - moving for some new thing, some new position . . . It's not what we do, it's that we do what we're called to do and that in it we glorify God. (unknown)