Marcus Aurelius Letter About Christian Martyrs in the Roman Army 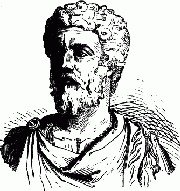 A letter (supposed) of the emperor Marcus Aurelius; from the copy enjoined to Justin Martyr's First Apology, as contained in The Ante-Nicene Fathers, vol. I.

Abridged and updated by Paul Pavao. (You didn't want to read this in a century-old translation.)

The Emperor Caesar Marcus Aurelius Antoninus, Germanicus, Parthicus, Sarmaticus, to the People of Rome, and to the sacred Senate, greeting!

I explained my plan to you and what advantages I had gained on the borders of Germany after much labor and suffering. Due to the circumstances of this war, I was surrounded by the enemy in Carnuntum. 74 cohorts cut us off from help, being stationed 9 miles off.

Then the scouts pointed out to us that the enemy was at hand. Our general, Pompeianus showed us that a mixed multitude of 977,000 men was closing in on us, which we all could see. I was cut off by this vast host, and I had with me only a battalion composed of the first, tenth, double, and marine legions.

I examined my own position and my army, considered the vast mass of the barbarian enemy, and I quickly betook myself to prayer to the gods of my country. They disregarded me.

So I summoned those among us who go by the name of Christians. After some inquiry, I determined that there was a great number and vast host of them. When they appeared before me, I raged against them.

This was not appropriate, for afterwards I learned their power.

The Christians Go to Battle

They began the battle not by preparing weapons or bugles. Such preparation is hateful to them because of the God they carry around in their conscience. We call them atheists, but it seems that they have a God as their ruling power in their conscience. 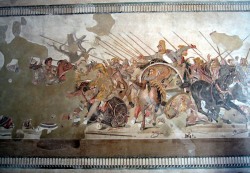 Mosaic of Roman battle at Pompeii

I say this because they threw themselves on the ground and prayed not only for me, but for the whole army as it stood, so that they might be delivered from the present thirst and famine. For five days we had gotten no water because there was none. We were in the heart of Germany and in the enemy's territory.

As soon as they threw themselves on the ground and began praying to God—a God of whom I am ignorant—water poured from heaven. On us it was most refreshing and cool, but upon the enemies of Rome it was a withering hail.

We also immediately recognized the presence of a God after their prayer, a God unconquerable and indestructible.

Because of this, then, let us pardon such as are Christians, lest they pray for and obtain such a weapon against us! And I counsel that no such person be accused by our courts only on the ground of being a Christian.

I also desire that whoever is entrusted with the government of the province shall not compel the Christian, who confesses and certifies such a matter, to retract.

These things should be confirmed by a decree of the Senate.

I command that this my edict be published in the Forum of Trajan in order that it may be read. The prefect Vitrasius Pollio will also see that it is transmitted to all the provinces round about.