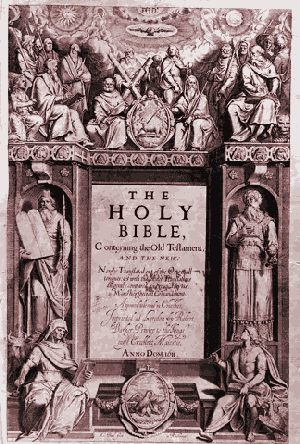 The King James version of the Bible was translated in 1611 by three teams of translators. King James of England authorized this translation, but he did not translate it himself.

Why King James Only?

The argument for the KJV only goes something like this:

The Bible says that not one jot or tittle will pass from the Law until it is all fulfilled (Matt. 5:18). Modern versions violate this by making changes from the KJV. These changes are not just in the translation but also in the Greek texts from which their New Testament is translated.

King James only literature says that the NASB and NIV, the two most popular modern translations 20 years ago, make some 5,000 changes in the Greek text of the New Testament, often leaving out important words and phrases.

Are we losing the Gospel in these modern versions?

If this is some sort of conspiracy, it's not a very good one.

The fact is, modern translations are just trying to recreate the most accurate Greek text. There is no conspiracy, and you cannot teach any different doctrines out of the New American Standard than you can out of the King James Version.

Another notable passage is 1 John 5:7, which is not even found in most modern translations.

King James only advocates argue that the omission in the modern versions takes away from the doctrine of the Trinity.

Of course, it does not. There are plenty of verses in modern translations that describe all three members of the Trinity in the same verse (e.g., Matt. 28:19 and 2 Cor. 13:14).

King James Only:
So What About Matthew 5:18?

Matthew 5:18 is a prophecy passage. The word there for "fulfilled" is the Greek genoito, which means "happened." Jesus is saying in Matthew 5:18 that no prophecy of the Law will be forgotten, but all of them will come to pass down to the smallest part or "every jot and tittle."

Jesus was not promising that the Greek text of the New Testament would never be in doubt throughout the centuries. He wasn't even commenting on such a thing.

And if he was, then we have a big problem …

Losing the Words of God?

What about our confidence in the Word of God? King James only advocates argue that the differences, as well as notes that are usually added to modern versions, create doubt in the Word of God because they indicate that we are not certain about the original wording of certain passages of Scripture.

Here is where it is time for us to be honest. There are doubts about the original wording of certain passages of Scripture!

This page on 1 John 5:7, which appears to be well researched, says that it's "an overstatement of the evidence" to say that Erasmus promised to include the Comma Johanneum, as it is called, if someone produce a manuscript.

They do say that the converse is true. Erasmus did refuse to put it in without Greek manuscript support.

I left my description unchanged because those two statements are not that different, and I got my version from a history book as well.

1 John 5:7 is one of the passages where there is NOT doubt about the original wording. The King James version is wrong on this passage, and we know that.

The extra passage, saying that there are three that bear witness in heaven, is included in the updated edition of the Latin Vulgate, put out by the Roman Catholic Church around A.D. 800. The original Vulgate, done by Jerome around A.D. 400, did not have it.

When Erasmus put together the Textus Receptus ("Received Text")in the 16th century, he did not include the part about three bearing witness in heaven because it was not supported by even one Greek manuscript.

There were people who were offended by this, and Erasmus told them that if they could produce even one Greek manuscript that contained the disputed passage, he would include it in his 3rd version of the Textus Receptus (but see sidebar). He had already finished versions one and two.

Not surprisingly, they came up with a Greek text, which Erasmus was aware was almost certainly a forgery. Erasmus, however, did not like personal conflict, and he included the passage in his 3rd version just as he promised.

His conscience got the better of him, though, so when he created the 4th version, he left it out.

Unfortunately, the translators of the King James Bible used a text based on Erasmus' 3rd version, not his 4th.

Thus, when modern versions leave out 1 John 5:7 they are not taking away from the words of God, they are correcting the Greek text back to the original wording of the apostle John. 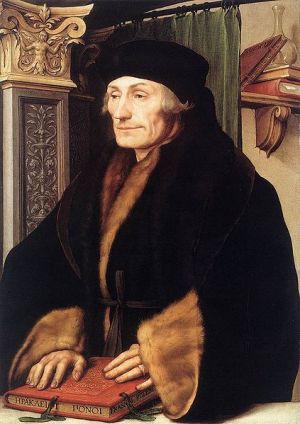 Painting of Erasmus by Hans Holbein in 1523

King James only advocates are right about one thing: there are questionable passages in our Bibles. There are numerous places where the over 5,000 Greek texts of the New Testament disagree with one another.

Sometimes it is obvious where the problem lies. A passage is clearly duplicated or a word is left out, and it obvious that this was a copyist's error.

In other cases, however, like, for example, Romans 8:1, it is impossible to tell. Some Greek texts have the phrase "who walk not after the flesh but after the Spirit."

Is this a case where a copyist looked down at Romans 8:4, saw that phrase, and accidentally added it onto Romans 8:1 as well? We don't know. Therefore, even if a modern translation chooses to leave that phrase out of Romans 8:1, they normally include a note saying that some Greek manuscripts—usually less ancient ones—include the phrase.

Sometimes such difficulties can be resolved by examining quotes of the Scriptures in the early Christian writings. We have Christian writings dating back to A.D. 100, or even before, that quote some passages of the New Testament.

Sometimes, however, a difficult Greek text can't be found quoted by the early Christians.

As a result, there are some passages in our New Testaments where we do not know the original wording of the writer.

We can pretend all we want, but facts are facts and history is history. There are simply some passages of the New Testament where we do not know the original wording.

King James Only:
Have We Lost the Word of God

Part of the problem we modern Christians have, whether we hold to King James only or not, is that we have made the Bible into something it was never meant to be.

Some even included books like The Letter of Barnabas, The Shepherd of Hermas, and First Clement.

Even as late as A.D. 390, Augustine of Hippo (the famous St. Augustine) talked about how to resolved disputes over which books should be included in the New Testament:

Accordingly, among the canonical Scriptures [the skilled interpreter] will judge according to the following standard: to prefer those that are received by all the catholic churches to those which some do not receive. Among those which are not received by all, he will prefer such as have the sanction of the greater number and those of greater authority to such as are held by the smaller number and those of less authority. (On Christian Doctrine II.8.12)

The early churches lived for 400 years with those kind of doubts, and they did just fine.

In fact, they lived significantly better than we do!

King James Only:
What is the Word of God

For this reason we thank God continuously; because when when you received the Word of God which you heard from us, you did not receive it as the word of man, but as it is in truth, the Word of God. (1 Thess. 2:13, emphasis added)

Eventually, I will have to do a page on the Word of God as it was understood in the Scriptures and in the early churches, which will thrill you, change your life, and build great confidence in God. For right now, let me just give you this.

Jesus Christ is the Word of God, and when he is planted in human hearts, like a seed (Jam. 1:18; 1 Pet. 1:23), he will produce in his followers everything they need to know in order to follow him.

That is why the Scriptures tell us—together as we speak the truth in love to one another (Eph. 4:11-16)—that we don't need any man to teach us. The anointing that comes from God will teach us all things (1 Jn. 2:27).

This is why Zaccheus knew, as soon as he heard the Word of God from the lips of Jesus, that he must do something about his love of money. He immediately promised to give half his goods to the poor and restore fourfold to everyone that he had cheated (Luke 19:8).

That same reason is why Peter knew, after hearing the Word of God from the lips of Jesus, that he was a sinner and that he needed to forsake everything and follow Christ (Luke 5:8,11).

Both men had the Word of God planted in their heart like a seed, and it gave them everything that they needed to know, whether they had heard it before or not.

This is the trust that the apostles and their churches had in the Word of God, which is the Scriptures, but is far more than the Scriptures as well.

You search the Scriptures because you think you have life in them; however, these are they which testify of me, and you refuse to come to me so that you might have life. (Jn. 5:39)

Return to History of the Bible