The Martyrdom of the Holy Martyrs Justin Martyr, Chariton, Charites, Paeon, and Liberianus

The text of this story of the martyrdom of Justin Martyr is taken from The Ante-Nicene Fathers, volume I. The grammar, wording, and some details of my perception of the prefect's attitude have been updated for ease of reading.

Chapter One:
Justin Martyr Is Examined by the Prefect Rusticus

ANCIENT INTRODUCTION: In the time of the lawless practicers of idolatry, wicked decrees were passed against the godly Christians in town and country. Rome was trying to force them to offer sacrifices to useless idols. Therefore, the holy men were arrested and brought before the prefect of Rome, Rusticus.

When they were brought before his judgment seat, the prefect Rusticus said to Justin, "Obey the gods at once, and submit to the kings."

"To obey the commandments of our Saviour Jesus Christ should bring neither blame nor condemnation," replied Justin.

Rusticus ignored the reply. "What kind of doctrines do you profess?"

Justin answered, "I have tried to learn all doctrines, but I have given in at last to the true doctrines: those of the Christians. I know they do not please you who hold false opinions."

"But they please you, don't they, you completely wretched man?" the prefect sneered.

"Yes," Justin Martyr replied, "because I follow them with correct dogma."

"So tell me, what is this proper dogma?"

"Correct dogma is found in the way we worship the God of the Christians," Justin Martyr began. "He has been one from the beginning, the maker and designer of the entire creation, visible and invisible. We also worship the Lord Jesus Christ, the Son of God, who was preached in advance by the prophets. They foretold that he was about to visit the human race as the herald of salvation and the teacher of good disciples."

Justin continued, "Nothing I say is significant compared with his limitless divinity. I acknowledge that only by prophetic power can he be sufficiently described, and the prophets did proclaim this One, whom I now say is the Son of God. I know that the prophets foretold his appearance among men from ancient times."

Rusticus seemed satisfied that this line of questioning had gone far enough, and he changed the subject.

"Where do you assemble?" Rusticus proceeded.

It's a beautiful thing to God when a Christian does battle with pain. When he faces threats, punishments and tortures by mocking death and treading underfoot the horror of the executioner; when he raises up his freedom in Christ as a standard before kings and princes; when he yields to God alone, and-triumphant and victorious-he tramples upon the very man who has pronounced the sentence upon him  God finds all these things beautiful.

"Wherever we want to and are able to," Justin replied. "Do you imagine that we all meet in the same place? Not so! The God of the Christians is not limited to a location. He is invisible, and he fills heaven and earth. Therefore, he is worshipped and glorified everywhere by the faithful."

Rusticus sighed. This was no angry prefect. He was not the least bit interested in Justin's speech. "Just tell me where you personally assemble. In other words, in what place do you, Justin, gather your followers?"

"I live above a man named Martin, at the Timiotinian Bath." Justin paused, then, knowing what the next question would be, he continued, "During the entire time I've lived here, because I'm now living in Rome for the second time, I don't know about any other meetings. I've simply taught the truth to anyone willing to come to me."

Rusticus was ready to get down to business. "So are you a Christian or not?"

Justin replied, "Yes, I am a Christian."

Rusticus glanced at the recorder, and the recorder nodded. With that the prefect was ready to move on to the others.

"And you, Chariton, are you also a Christian?"

Chariton replied, "I am a Christian by the command of God."

The prefect turned to the woman. "What say you, Charito?"

"I am a Christian by the grace of God," Charito replied.

He turned to Euelpistus. "And you? What are you?"

Euelpistus, who was a servant of Caesar, answered, "I, too, am a Christian. I have been freed by Christ, and by the grace of Christ I share in the same hope."

Rusticus made sure the recorder was getting all this, then asked Hierax, "And you? Are you a Christian?"

Hierax said, "Yes, I am a Christian, for I revere and worship the same God." 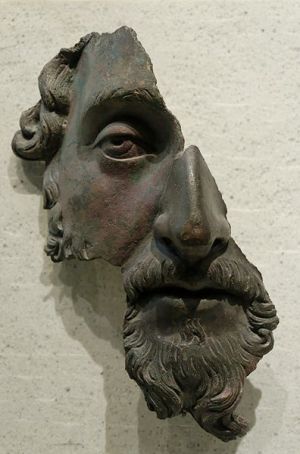 Rusticus swept his eyes across the group in front of him. He had one more thing to clear up. It was appropriate to make some effort to save the lives of the accused. "Did Justin make you Christians?"

Hierax answered first, "I was a Christian, and I will remain a Christian."

Paeon, who had been asked nothing, chimed in, "I, too, am a Christian."

Rusticus looked at him. "And who taught you?"

"We received this good confession from our parents," Paeon replied.

Euelpistus had no intentions of letting Justin take the rap for all of them. "I listened to Justin willingly, but I learned to be a Christian from my parents as well."

"Where are your parents?" Rusticus asked.

"And yours?" He was asking Hierax.

"Christ is our true father, and faith in him is our mother. My earthly parents died, and I was driven out of Iconium in Phrygia. Then I came here."

There was one more to question. Rusticus the prefect asked Liberianus, "And what say you? Are you a Christian and unwilling to worship?"

Liberianus said, "I, too, am a Christian, for I worship and reverence the only true God."

There was one thing left to do. These Christian martyrs had to be given a chance to recant.

Chapter Four:
Rusticus Threatens Justin Martyr and the Other Christians

The prefect spoke to Justin Martyr first. "Listen, you who are called learned and think you know true doctrines. If you are scourged and beheaded, do you believe you'll ascend to heaven?"

"That is my hope," Justin replied. "If I endure these things, I shall have his gifts. I know that for all who have lived according to our teachings, the divine favor remains on them until the completion of the whole world."

Though death is decreed against those who teach or at all confess the name of Christ, we everywhere both embrace and teach it. And if you also read these words in a hostile spirit, you can do no more … than kill us; which indeed does no harm to us, but to you and all who unjustly hate us and do not repent, brings eternal punishment by fire.

"So you suppose that you will ascend into heaven to receive some payment for your faithfulness?"

"Not suppose, I know and am fully convinced of it," Justin Martyr replied.

Rusticus shrugged. "Let's get right to what matters, then. You've been brought here to offer sacrifice, all of you together, to the gods."

Justin wasn't interested. "No one in their right mind leaves godliness to take up ungodliness."

"You're aware that unless you obey, you will be mercilessly punished?"

Justin answered, "Through prayer we can be saved because of our Lord Jesus Christ, even after we have been punished. This will become salvation and confidence to us at the much more fearful and universal judgment of our Lord and Savior."

The other martyrs echoed his sentiment. "Do whatever you want. We are Christians, and we don't sacrifice to idols."

Rusticus was uncaring. He had done his duty.

Rusticus stood to make his pronouncement. "Let those who have refused to sacrifice to the gods and to yield to the command of the emperor be scourged, then let them be led away and beheaded, according to the laws."

The holy martyrs, having glorified God, were taken to the customary place, beheaded, and they perfected their testimony in the confession of the Savior.

Some of the faithful secretly removed their bodies, then laid them in a suitable place. The grace of our Lord Jesus Christ worked with them, to whom be glory forever and ever. Amen.

Not Likely To Be Martyred?

Since, o son, you desire martyrdom, hear. Be like Abel was, or like Isaac himself, or Stephen, who chose for himself on the way the righteous life. … First of all, overcome the evil one with your good deeds by living well. … Even now, if you have conquered by good deeds, you are [already] a martyr in him.

This Christian martyrs story is simple and straightforward, but it testifies to the faith of Justin Martyr and the Christians with him. It's one thing to say that you believe in Jesus Christ and the eternal life that he purchased with his blood; it is quite another to prove your faith by giving up your temporary life on this earth.

It doesn't take special or unusual events to make a martyrdom glorious. There is no greater love, says the Scriptures, than to give up your life for a friend.

Having confessed Christ before men, martyrs like Justin Martyr, Chariton, Charito, Paeon, Hierax, and Liberianus will find that Jesus Christ will also confess them before the Father, who is God of all.

Let us be inspired to similar faith. There are places where men, women, and children continue to give their earthly lives in hope of the eternal life promised by God, who cannot lie, since before the world began.

Even here in the West, however, where martyrdom is unlikely, we have daily opportunities to deny our fears and embarrassment and to stand up as disciples of the Lord Jesus Christ, confessing him before men in return for that final and great confession to be made by Jesus Christ before his Father and ours.