You should have gotten to Honest Bible Translation from the Seraphim: Dragons in Heaven page. 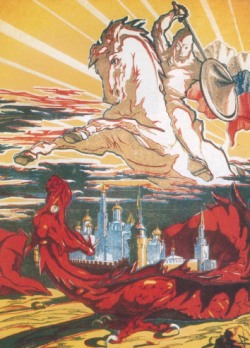 This is an old Russian revolutionary poster. That's NOT a seraph

I have to admit I was a little irritated when I realized that seraphim were all over the Old Testament. Why didn't anyone tell me?

An honest Bible translation is not going to simply refuse to translate something. And if they have a good reason, then they should tell us about it in a note.

Words like baptize, apostle, and deacon are untranslated words as well. They come from baptizo, apostolos, and diakonos respectively. "Baptize" and "apostle" are not so bad. We're more consistent with those.

If a Bible version is going to be an honest Bible translation, then it should tell us when it makes exceptions.

By the time I looked up seraphim from Isaiah 6, I had been a Christian for nigh on twenty years. I had read Isaiah at least 15 times, probably more. I had read it in several translations using several different study Bibles, and I had never once seen a note telling me that this is not the only use of seraphim in the Old Testament!

For example, I currently own a New American Standard side reference Bible. In Isaiah 6:2, my side reference sends me to Revelation 4:8, where I can find out that the 4 living creatures also have six wings. It gives no reference anywhere to the other verses with seraphim.

Nor will you find them on your own because they translated the word as "serpents" wherever else it occurred.

An honest Bible translation will not hide things from you.

It's not just the New American Standard Bible. I have an Ultrathin Reference Bible in the Holman Christian Standard Version. It gives the same reference: Rev. 4:8.

Are the wings more important than the body? It'd be nice to know that seraph means snake!

That NASB has a side note that tells me in verse 4 that the "foundations" of the temple are literally "door sockets."

Okay, I guess there's some sense in which that's interesting to know.

Not as interesting as knowing that the Seraphim are snakes!!! Why no note there?

Ah, my HCSB has a note directly on "Seraphim." They're going to tell me!

Their note says, "heavenly beings." It's a little hard to read in my Bible because I've crossed it out and written in "serpents."

Why would an honest Bible translation hide the meaning of seraphim?

Why Won't They Tell Us?

How did you react when I said on the previous page that there are dragons in heaven? Were you glad?

There's probably more glad people in 2009 than there would have been in 1979. As a nation we've become much more liberal thinkers over the last 30 years.

However, religious people are the slowest to become liberal thinkers. My guess is that the translators are scared of upsetting you.

They think you'll be offended by the thought of snakes in heaven.

And we certainly shouldn't hide things on purpose!

This seraphim issue is not important. It doesn't affect our theology or behavior even a little. We can get over finding out that there are snakes, serpents, or dragons in heaven.

We will never get over sweeping things under the rug. That's a very bad habit to get into.

Return to Seraphim: Dragons in Heaven

Or return to My Stuff