Ulrich Zwingli made the bold move of leaving the Roman Catholic Church. Felix Manz went further, and he paid for it with his life.

Both were citizens of Zurich, Switzerland in the early 16th century. Together with the city council and entire city of Zurich they left the Roman Catholic church.

The Conflict Between Felix Manz and Ulrich Zwingli

In 1525 Zwingli and Manz split over the issue of infant baptism. Felix felt it was a compromise with the papists (the Roman Catholics). The city council sided with Ulrich Zwingli. Felix Manz and his friends (among them Conrad Grebel and Georg Blaurock) were ordered to recant and have their infants baptized.

Not only did Manz and friends refuse, but they immediately held a meeting and conducted adult baptisms, a crime the Zurich city council made punishable by drowning within two months.

Felix Manz would prove the first victim of the wrath of the city council and Ulrich Zwingli.

On January 5, 1527 Felix was led from prison to a boat. On the way he gave praises to God and preached to the people gathered to watch him die.

One of Zwingli's priests went along, still trying to convert him. Manz's brother and mother were there as well, urging him to stand fast. 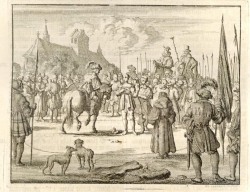 He was put into a boat on the river Lammat. His hands were tied, and he was made to squat down. A stick was stuck behind his knees and above his elbows to immoblize him, and he was taken to the middle of the river.

There, with his mother, brother, and his fellow "rebaptizers" (Anabaptists) shouting encouragement, he was tipped into the lake, a final death by baptism.

He was not horrified nor afraid. His last words were, "Into your hands, O Lord, I commend my spirit."

A Final Word from Felix Manz

Felix sent a letter of encouragement to his brethren before he died. The full text can be found in Martyr's Mirror, but here are some of the more inspiring excerpts.

"My heart rejoices in God, who gives me much knowledge and wisdom so that I may escape the eternal and never-ending death.

"I praise you, O Lord Christ from heaven, that you turn away my sorrow and sadness; you whom God has sent me as a Savior and for an example and a light. You have called me into your heavenly kingdom already, before my end has come, that I should have eternal joy with him [i.e., the Father] and should love him and all his righteousness … without which nothing avails or subsists.

"Alas how many are found … who boast of the Gospel and speak, teach, and preach much about it, but are full of hatred and envy. They do not have the love of God in them, and their deceit is known to all the world … They hate the pious on the earth and obstruct the way to life and to the true sheepfold.

"They call upon the authorities to kill us, by which they destroy the very essence of Christianity. But I will praise the Lord Christ, who exercises all patience towards us. He instructs us with his divine graces and shows love to all men … which none of the false prophets are able to do.

"Here we must observe this difference, that the sheep of Christ seek the praise of God. This is their choice, and they do not allow themselves to be hindered either by possessions or temporal good, for they are in the keeping of Christ. The Lord Christ compels no one to come to his glory; only those that are willing and prepared attain to it by true faith and baptism.

"Whenever a person brings forth genuine fruits of repentance, the heaven of eternal joys is, through grace, purchased and obtained for him by Christ, through the shedding of his innocent blood, which he so willingly poured out. With that he showed us his love. He endues us with the power of his Spirit, and whoever receives and uses it grows and is made perfect in God. Only love to God through Christ shall stand and prevail, not boasting, denouncing, or threatening.

"It is love alone that is pleasing to God; he that cannot show love shall not stand in the sight of God.

" … This Light of Life they have before them … but those who are hateful and envious and wickedly betray, accuse, smite, and quarrel cannot be Christians… . By this we may know those that are not on the side of Christ.

"With this I will finish my discourse, desiring that all the godly be mindful of the fall of Adam, who when he accepted the advice of the serpent … the punishment of death came upon him. Thus it shall also happen to those who do not accept Christ, but resist him, love this world, and have not the love of God.

"And thus I close with this: I will firmly adhere to Christ and trust in him who is acquainted with all my needs and can deliver me out of it. Amen."