Are the people who sinned before Christ died "covered by his blood"? Were their sins forgiven before, or when He died were they forgiven then? 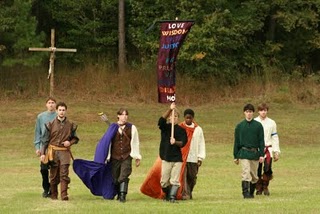 Let's look at Christ's atonement a little differently. In Psalm 51, David tells us that God isn't really interested in a sacrifice for David's sins. God wants "a broken heart and a contrite spirit." These are the sacrifices that God is interested in.

Later, in Acts 10, Peter tells Cornelius, "In any nation, the one that fears God and works righteousness is accepted by him."

God was already merciful, even before Christ's atonement. He would forgive the repentant, and he would accept those who chose righteousness.

More than anything, Jesus' death was for us. He brought about an awesome new covenant. David was a man who had the Spirit of God under the old covenant, but very few others did. Some priests, some prophets, some kings, men like Moses, Saul, and the judges. However, almost all normal people were not offered the Spirit of God.

Under the new covenant, though, the promise is that the Spirit of God would be poured out on old men, young men, maidservants, everyone. "The promise is to you and to your children and to all who are afar off," Peter told the Jews (Acts 2).

What the Law could not do because it was weak through the flesh, God did. By sending his own Son in the likeness of our sinful flesh, as an offering for sin, he condemned sin in the flesh, so that the righteous requirement of the Law might be fulfilled in us who do not walk according to the flesh but according to the Spirit. (Rom. 8:3,4)

So Jesus' death broke the power of sin and gave us access to the Spirit of God. Thus, we are far better off than those under the Law who had to struggle and find out that their very nature is to disobey the Law.

However, to get back to your question, those under the old covenant could be forgiven as soon as they repented. They didn't have to wait for Jesus to die to be forgiven. Mercy is in the very nature of God; he's always been forgiving to the repentant even with only a broken heart and contrite spirit as atonement.