I've made a big change in my plans and replaced the "Modern Era" with this Evangelicals section. I have made a separate Catholic/Orthodox section as well.

Why? For three reasons: 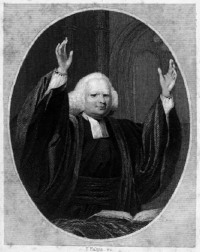 Christian Religion History has profiles of most major denominations. Even after my modern section is complete, which is not even on my agenda right now, you'll find his more quick and "disinterested" (meant in a good way). I, of course, do very little that's quick, and even less that's not tinged with my personality, though my personality is deeply honest.

Who Are the Evangelicals?

There's no sense discussing this movement if we don't know what it is, and determining that is difficult.

I always mourn the lack of emphasis on the church in evangelical writings. Nonetheless, I know God has regard for the diligent and pure-hearted.

I liked and want to recommend much of what I saw at From Strength 2 Strength.

Craig D. Allerts wrote one of the books in a historical series put out by BakerAcademic, which is an Evangelical publishing house. Yet even he wrestles with the defining them:

The problem of definition centers on the fact that evangelicalism is a movement. Movements tend to defy precise definition by their very nature ...

Although most evangelicals belong to a denomination or ecclesial tradition, they do not comprise a single denomination or tradition in and of themselves. Although many Christians proudly wear the label "evangelical," there is no membership list to indicate that they actually are such or even who they are. In other words, a precise definition evades us. (A High View of Scripture?

, BakerAcademic: Grand Rapids, MI; 2007, p. 17-18; Christian History for Everyman gets a commission if you buy A High View of Scripture? with that link)

Allerts never gave a precise definition, though he did tie the term—mostly—to the Reformation.

I will give a precise definition.

For our sake, I mean those who believe in being born again through faith and who subject themselves—or claim to subject themselves—to the authority of Scripture I am quite confident that the huge majority of Evangelicals will be happy to be defined by those two issues.

I have some learning to do on post-Reformation history before this page becomes excellent. I especially want to look at pietism. It is responsible for eliminating a lot of the emphasis on sacraments from the Protestant movement.

However, we can get started on the doctrines of the movement already.

There are three Reformation tenets that are popular among most Evangelicals: sola fide, sola gratia, and sola scriptura.

I really enjoy addressing those three ideas: faith only, grace only, and Scripture only. I believe I love the idea of sola gratia even more than the Reformers, but I have real questions about the historical and Scriptural basis of the other two.

I jumped right into sola fide, salvation by faith alone earlier in a different section. That doctrine has morphed and transformed in the 500 years since Martin Luther, but it has remained central all these centuries …

I had read a lot of history books about Luther, but not much of Luther himself until recently. I don't think his view of "faith alone" was portrayed accurately to me.

This highlights to me once again the importance of using primary sources, or else knowing whom you can trust. Getting your learning from strangers is dangerous, even if they're educated strangers.

Luther was ready to reject Hebrews and James because he could not reconcile them with his understanding of faith alone. That and the primacy of the doctrine in our day make it a subject that must be addressed.

I've been reading his writings, and I'm convinced that neither Luther nor Calvin would have been very happy with some of the ideas being taught today. However, when I wrote Sola Fide I didn't realize that. Forgive me if I'm too hard on him on that page.

On the other hand, he was going to reject books of Scripture over his doctrine. Someone needs to go after him!

But I have to give him credit for statements like these:

What is the proof by which one may know that this heavenly bread is his and that he is invited to such a spiritual supper? He needs only to look at his own heart. If he finds it is so disposed that it is softened and cheered by God's promise … then he may be assured that he is one of the invited … From that moment on he loves his neighbor and helps him as his brother …

Where such fruits are not produced, there is certainly no true faith. (The Sermons of Martin Luther, vol. III, pp. 403-04)

There's a really awesome section on following Christian doctrine "as eminent and exemplary as we can" in a book by William Law from the 1729. Since it's not copyrighted, I pulled that section out for you to read.

Links on sola gratia and sola scriptura are still to come, as are the following: