Diocletian and the Great Persecution

I won't spent a lot of time on the details of Diocletian and his Great Persecution. We have a higher goal than the details. 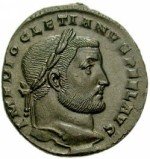 The Great Persecution, from A.D. 303 to 311, was a time of sudden transition and massive change in the history of Christianity. It's the change and what caused it that we want to focus on.

To do so, I want to rename the Great Persecution and give you my unique (but historically accurate) perspective.

I took judo for several years as a child. Even though I was very small, I was pretty good at it. In Judo, you don't have to be stronger than your opponent. Instead, you make your opponent's strength work for you.

I must have had a good teacher because I remember lots of surprise on the faces of larger kids as they crashed to the ground.

There's a secret to getting your opponent to help you throw him.

You push really hard. Your opponent automatically pushes back.

When they push, you pull and rotate into a throw. It's amazing how far their momentum will carry them.

The Push: Diocletian Persecutes the Church

Though it's popular to believe that Christians were always being persecuted in the Roman empire, it's not true. Empire-wide persecutions were rare, and the Great Persecution under Diocletian was the only one of any great length, lasting eight years.

It is argued that the Great Persecution was hardly great. It was possibly sporadic in the west and occasional in the east. Constantius and Maximian, co-emperors in the west, were not interested in it.

However, there is no doubt about the effects. At least the leaders of the churches were very affected, and many showed up at the Council of Nicea (A.D. 325) bearing scars from the persecution.

It was intense. Diocletian's goal was to wipe out the Church. He hunted down Christians and their Scriptures. He especially loved to get hold of church leaders.

Note: Diocletian retired in 305 (the only Roman emperor ever to voluntarily retire), and the persection was carried on the east by Galerius. Constantius (then Constantine) and Maximian (then Maxentius) in the west had little interest in the persecution.

He was trying to turn them back to paganism, to the old Roman religion with the emperor as a God. Therefore, anyone he caught and tried could be released by offering a sacrifice to the gods or to the emperor.

They could also gain great favor by turning over copies of the Scriptures to be burned.

In addition, Diocletian destroyed their church buildings. This was something that couldn't be done earlier, as Christians rarely had devoted meeting places in the 2nd century. It was too easy to see them destroyed or taken over. While empire-wide persecutions were rare, local persecutions at the whim of a governer or prelate were not.

It was a horrible, difficult time for Christians (at least for the leaders). Many Christians fell away, and many others were tortured, thrown in a dungeon, or put to death.

The Pull, Turn and Throw:
Constantine and the Edict of Milan

By 311, Galerius could no longer stomach the attack on the church. Along with Constantine and Licinius he issued the Edict of Toleration, ending the Great Persecution.

In A.D. 312, Constantine the Great marched on Rome and took part of the empire from the co-emperor Maxentius. That left himself and Licinius as co-emperors, Galerius having died of a terrible disease in 311.

Was Constantine Ever a Christian?

It depends on your definition of Christian.

Constantine was still emperor in a time when Christians could not make war nor be Caesar (Tertullian, Apology 21; Canon 12 of the Council of Nicea). He was not baptized, and he was still officially the high priest of Roman paganism.

On the other hand, he had already urged his entire populace, by letter, to become Christians, saying, "Only let men of sound judgment be assured of this, that those only can live a life of holiness and purity, who you [in context, the God of the Christians] call to a reliance on your holy laws" (Life of Constantine II:56). He also was already addressing the bishops as his brothers.

Constantine and Licinius added their Edict of Milan in A.D. 313. It went further than Galerius' edict, not only ending persecution, but restoring privileges and property to Christian leaders.

This was sweet victory for the Christians. They welcomed Constantine the Great with open arms. He bestowed favors on them, and he surrounded himself with bishops. In every way, they received him as a Christian.

But he wasn't one, and they shouldn't have.

The Caesars, too, would have believed on Christ, if either the Caesars had not been necessary, or if Christians could have been Caesars. (Tertullian, Apology 21, c. A.D. 210)

The Throw and the Fall of Christianity

Constantine the Great eventually took the rule of Rome from both Galerius and Licinius, finally defeating Licinius in a civil war in A.D. 324. The following summer he presided over the Council of Nicea.

Constantine didn't fool the church by calling himself a Christian. He didn't try to. He remained high priest over the pagan religion. He was a great emperor from a worldly standpoint. He did not want conflict between the Christian and pagan religions to divide his empire.

However, Christianity was clearly his favorite religion, and he was highly involved in the dispute over the Trinity that hit its height at the Council of Nicea. He participated in those disputes and appointed and removed bishops, occasionally expelling ones he considered heretical from the empire.

As I said, the Church embraced his intervention and even praised him as an angel sent from God for their protection.

They also embraced the masses of unconverted pagans who entered Christianity behind him. Philip Schaff, the great historian, writes:

From the time of Constantine church discipline declines; the whole Roman world having become nominally Christian, and host of hypocritical professors [i.e., those "professing" Christianity] multiplying beyond all control. (History of the Christian Church, volume III, page 9)

I have always said that the effect of this influx of unconverted pagans who were simply joining a national religion can be best seen in the compared histories of Eusebius and Socrates Scholasticus. Eusebius wrote his Ecclesiastical History in A.D. 323, while the Church still basically possessed the Christianity of the apostles. Socrates Scholasticus wrote his around A.D. 440 and covered the time after Eusebius' history.

The Church was fallen.

A Summation of the Great Judo Throw

Diocletian (and afterwards Galerius), with the Great Persecution, pushed on the Church, Constantine did the pull, turn, and throw. The Church crashed to the ground. It has never fully recovered. No history like Eusebius' can be written again. The Anabaptists of the early 16th century, the Moravians and Waldensians of the 14th century, and many others have a similar history. All, however, had much less influence than the apostles' churches of the 2nd and 3rd centuries.

Around such glorious lights is massive darkness. The darkness was so great that the cooperative rule of Rome and Church beginning (for the most part) after the end of the Diocletian persecution is known as the Dark Ages.

How bad is it when even the world calls the influence of the Church darkness?

How about the horror stories that resulted from the fall of the church during the Diocletian persecution.

Christianity, in its pure state, was powerful. Tertullian testifies:

Those who once hated Christianity because they knew nothing about it, no sooner come to know it than they all lay down at once their enmity. From being its haters, they become its disciples … and their numbers are as great as are laid to our charge. Their outcry is that the State is filled with Christians … Both sexes, every age and condition, even high rank, are passing over to the profession of the Christian faith. (Apology 1, c. A.D. 200)

Throughout the 2nd and 3rd centuries, the devil found out that what Christ had said is true. He built his Church, and the gates of hell could not prevail against it. Tertullian adds:

The oftener we are mown down by you, the more in number we grow. The blood of Christians is seed. (ibid. 50)

Diocletian's force was completely ineffective against the Church and the power of a message that was lived out. But where force is ineffective, often Judo can be very effective.

It was not the force of Diocletian or the Great Persecution that was effective against the Church. It was the embrace of the world that made it fall. May we shake ourselves from its arms, rise up, and seed the world again with the purity that the apostles left in their churches.

"Earnestly contend for the faith once for all delivered to the saints."