Quotes About Clean and Unclean Foods

Quotes about clean and unclean foods from throughout Christian History. 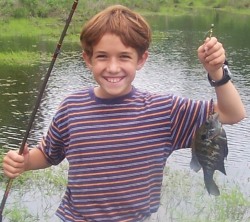 This crappie has scales: clean food!

But as to their meticulousness concerning foods, their superstition regarding the Sabbaths, their boasting about circumcision, and their fancies about fasting and the new moons—which are utterly ridiculous and unworthy of notice—I do not think you need to learn anything from me. For to accept some of those things which have been formed by God for the use of men … and to reject others … , how can this be lawful? (ch. 4)

For the Christians are distinguished from other men neither by country, nor language, nor the customs which they observe. … Inhabiting Greek as well as barbarian cities, according as the lot of each of them has determined, and following the customs of the natives in respect to clothing, food, and the rest of their ordinary conduct, they display to us their wonderful and confessedly striking  method of life. (ch. 5)

Now why did Moses say that you shall not eat the pig, the eagle, the hawk, nor the raven, nor any fish that does not have scales? He embraced three doctrines in his mind in doing so. … Moses spoke with a spiritual reference.

For this reason, he named the pig, in order to say, "Don't join yourself to men who resemble pigs." For when they live in pleasure, they forget their Lord; but when they come to need, they acknowledge the Lord.

"Nor shall you eat," he says, "the eagle, the hawk, the kite, nor the raven." He means that you should not join yourself to men who know how to procure food for themselves by labor and sweat, but seize the property of others in their iniquity. Also, though they have an air of simplicity, they are on the watch to plunder others.

"And you shall not eat," he says, "the lamprey, the polypus, or the cuttlefish." He means that you should not join yourself to or be like men who are ungodly to the end and are condemned to death. …

[He adds comments about the hare and weasel here.]

So Moses issued three teachings concerning foods, with a spiritual significance, but they received them according to fleshly desire, as if he had merely spoken of foods. …

Moses says still further, "You may eat every animal that is cloven-footed and ruminates." … What, then, does he mean? That we ought to join ourselves to those that fear the Lord, who meditate in their heart on the commandment they have received … who ruminate on the Word of God.

But what does cloven-footed mean? That the righteous man walks in this world but looks forward to the holy age.

Behold how well Moses legislated! How was it possible for them to understand or comprehend these things? We, then, rightly understanding his commands, explain them as the Lord intended. (Letter of Barnabas 10)