[Christians] marry, as do all others. ... They have a common table, but not a common bed. (Letter to Diognetus 5)

Take heed to come together often to give thanks to God and show forth his praise. For when you assemble frequently in the same place, the powers of Satan are destroyed and the destruction at which he aims is prevented by the unity of your faith. Nothing is more precious than peace, by which all war, both in heaven and earth, is brought to an end. (Letter to the Ephesians 13)

Labor together with one another. Strive in company together. Run together; suffer together; sleep together; awake together, as the stewards, assessors, and servants of God. (Letter to Polycarp 6) 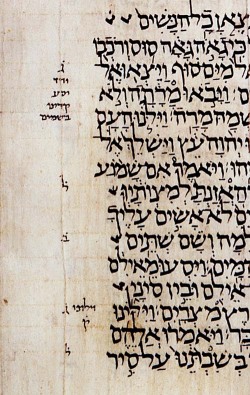 Leningrad Codex of the Hebrew Scriptures

Do not, by retiring apart, live a solitary life, as though you were already justified. Instead, coming together in one place, inquire together about what will help all of you. (Letter of Barnabas 4)

You shall seek out the faces of the saints every day, either by laboring in word and going to exhort them, meditating how to save a soul by the Word, or with your hands you will work for the redemption of your sins. (Letter of Barnabas 19)

You shall seek out the faces of the saints every day so that you may rest upon their words. You shall not long for  division, but shall bring those who contend to peace …You shall not turn away from him that is in need, but you shall share all things with your brother and shall not say that they are your own. For if you share what is immortal, how much more things which are temporary? (ch. 4)

Since our persuasion by the Word, we stand aloof from [the demons involved in idolatry] and follow the only unbegotten God through His Son.

We who formerly delighted in fornication now embrace chastity alone. We who formerly used magical arts dedicate ourselves to the good and unbegotten God. We who valued above all things the acquisition of wealth and possessions now bring what we have into a common stock and share with every one in need. We who hated and destroyed one another and would not live with men of a different tribe because of their different customs now, since the coming of Christ, share the same fire with them.

We pray for our enemies and attempt to persuade those who hate us unjustly to live according to the good precepts of Christ. This is so that they may become partakers with us of the same joyful hope of a reward from God, the Ruler of all. (First Apology 14)

We … continually remind each other of these things. The wealthy among us help the needy, and we always keep together. For all things with which we are supplied, we bless the Maker of all through his Son Jesus Christ and through the Holy Spirit.

On the day called Sunday, all who live in cities or in the country gather together in one place, and the memoirs of the apostles or the writings of the prophets are read, as long as time permits. Then, when the reader has ceased, the president [I think this means whichever brother is presiding, but no one knows for sure] verbally instructs and exhorts to the imitation of these good things.

Then we all rise together and pray, and … when our prayer is ended, bread and wine and water are brought, and the president in like manner offers prayers and thanksgivings according to his ability, and the people assent, saying Amen. There is a distribution to each and a participation of that over which thanks have been given, and to those who are absent a portion is sent by the deacons.

They who are well to do and willing give what each thinks fit, and what is collected is deposited with the president. He helps the orphans, widows and those who, through sickness or any other cause, are in need. [He helps] those who are in bonds and the strangers sojourning among us. In a word [he] takes care of all who are in need.

But Sunday is the day on which we all hold our common assembly, because it is the first day on which God, having made a change in darkness and matter, made the world. On the same day Jesus Christ our Savior rose from the dead. For he was crucified on the day before that of Saturn [Saturday], and on the day after that of Saturn, which is the day of the Sun, he appeared to his apostles and disciples and taught them these things. (First Apology 67)

They are angry with us, too, because we call each other brethren. There is no other reason for this, I think, than because among them names of consanguinity are given in mere pretence of affection. ...

How much more fittingly they are called and counted brothers who have been led to the knowledge of God as their common Father? Who have drunk in one Spirit of holiness? Who from the same womb of a common ignorance have agonized into the same light of truth?

But perhaps the very reason we are regarded as having  less right to be considered true brothers is that no tragedy causes dissension in our brotherhood. Or maybe it is that the family possessions, which generally destroy brotherhood among you, create fraternal bonds among us. One in mind and soul, we do not hesitate to share our earthly goods with one another. All things are common among us but our wives. (Apology, ch. 39)

Let the servants [deacons] and elders assemble daily at the place which the overseer [bishop] shall appoint for them. Especially do not let the servants neglect to assemble every day unless sickness prevents them. When they have all assembled they shall instruct those who are in the church. Having also prayed, let each one go about his own business. (Apostolic Tradition 33:1)

Nobody can do as much damage to the church of God as the man who is within its walls, but not within its life. (Unknown)

So much as one person with a contrary spirit to God is enough to affect all the meetings - that the revival fire did not flow until that person broke and confessed, or the Lord removed him. (From John the Baptist TV, whose mailing list I do NOT endorse, but which often sends out excellent quote lists.)

For my own part I've always been curious about how such a vast, complicated and sumptuous organization as the Roman Catholic Church came to supersede the original isolated groups of simple believers in Jesus (The Invention of Christianity and the Papacy, Introduction, from www.catholica.com.au)

Most of the people I've encountered are looking not for a religion to answer all their questions but for a community of faith in which they can feel safe asking them. (Evolving in Monkey Town; cited by Dean Nelson, "Why certainty about God is overrated"; USA Today; Monday, Aug. 29, 2011; p. 7A)