To be honest in apologetics [which means a defense of a faith], must be defending the Truth. In other words, when the evidence points against you, you have to be able to admit it.

Since, for the most part, both Catholic and Protestant apologists are given their beliefs from a third party, whether it be the Pope or a Protestant denomination, they have to defend beliefs even if the evidence is against those beliefs.

One last introductory point: In order for a belief to be false or wrong, there must be some standard to measure it against. As an example the existence of God—or for that matter the existence of pink unicorns in an alternate universe—cannot be disproved. For the most part, whether God is angry about something cannot be proven or disproven.

However, when both Catholics and Protestants claim to have derived their beliefs from the apostles, then there can be evidence for or against this. That evidence is not always conclusive, nor is there always evidence available, but in many cases—especially on major doctrines that have been talked about for centuries—evidence can be abundant.

The questions this page addresses is: Are Catholic apologists honest with that evidence, and can they be honest?

To make this page simple, I am going to cover just one important issue on which a Roman Catholic apologist cannot be honest.

On this issue, he has no "wiggle room." Admitting the truth would dissect his faith. He can never bend, and he can never admit what is obviously true. If he did, he would no longer be a Roman Catholic apologist.

The Pope in the Early Church

I am not going to argue this whole issue here. It's covered thoroughly elsewhere on this site.

I am going to give an example where every Roman Catholic apologist and book has been dishonest.

St. Cyprian and the Papacy

Every Roman Catholic that has ever tried to tell me that there was a pope in the Pre-Nicene Church has quoted Cyprian, bishop of Carthage from A.D. 249-258. He's the earliest writer to claim that Peter was able to pass the keys of the kingdom, mentioned in Matthew 16:19, on to the Church.

Icon of St. Cyprian of Carthage. We have no way of knowing if he looked like this, of course.

Thus, the Catholic Encyclopedia, in its article "The Pope," refers to St. Cyprian in these words:

In the middle of the third century St. Cyprian expressly terms the Roman See the Chair of St. Peter, saying that Cornelius has succeeded to "the place of Fabian which is the place of Peter" (Epistle 51:8; cf. 75:3).

A Catholic apologist who wrote me personally quotes St. Cyprian as saying:

[T]he Church is one, and as she is one, cannot be both within and without. For if she is with [the heretic] Novatian, she was not with [Pope] Cornelius. But if she was with Cornelius, who succeeded the bishop [of Rome], Fabian, by lawful ordination, and whom, beside the honor of the priesthood the Lord glorified also with martyrdom, Novatian is not in the Church; nor can he be reckoned as a bishop, who, succeeding to no one, and despising the evangelical and apostolic tradition, sprang from himself. (Letters 69[75]:3 [A.D. 253])

Another favorite quote is found in St. Cyprian's tract, On the Unity of the Church. After quoting Matthew 16:19, St. Cyprian says:

Upon one he builds his church … The other Apostles were indeed what Peter was, endowed with a like fellowship both of honour and of power, but the commencement proceeds from one, that the Church may be shown to be one … He that holds not this unity of the Church, does he believe that he holds the Faith? (ch. 4)

Then why did he call a council specifically to overthrow the "pope's" authority?

St. Cyprian: The Rest of the Story

Cyprian did believe that Jesus gave "keys" to Peter, and he did believe Peter passed those keys on …

St. Cyprian's quote in On the Unity of the Church continues in the following chapter, just two sentences after the last quote ended:

And this unity we ought firmly to hold and assert, especially those of us that are bishops who preside in the Church, that we may also prove the episcopate [i.e., all the bishops] itself to be one and undivided. … The episcopate is one, each part of which is held by each one for the whole. (ibid. 5)

Cyprian believed the keys of the kingdom to be passed by Peter to all the bishops together, who constituted one "episcopate."

How do I know this? Why does he mention Rome and Pope Cornelius in the quotes above?

How Do We Know St. Cyprian Didn't Believe the Keys Were Passed to the Bishop of Rome?

The most certain proof that Cyprian did not believe in papal primacy is to observe his actions. St. Cyprian was locked in a battle with Stephen, the bishop of Rome, during his entire tenure as bishop. 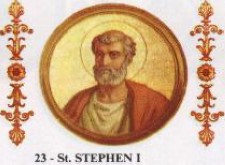 The supposed "pope" Stephen
St. Cyprian rejected his authority at at a council with 87 African bishops

Cyprian once called a council of 87 bishops in Carthage. The purpose of that council, according to The Ante-Nicene Fathers, vol. V, was:

If St. Cyprian believed that the bishop of Rome was pope and had primacy over all other bishops, he sure had a strange way of showing it!

That council declared, in the very first paragraph of its report of proceedings:

For neither does any of us set himself up as a bishop of bishops, nor by tyrannical terror does any compel his colleague to the necessity of obedience; since every bishop, according to the allowance of his liberty and power, has his own proper right of judgment, and can no more be judged by another than he himself can judge another. (ibid.)

Can there be any more certain proclamation against the papal authority than this? The Seventh Council of Carthage, called by St. Cyprian himself and with 87 bishops unanimously assenting, came together specifically to reject a decree by Stephen, bishop of Rome. In doing so, they declared that no bishop can set himself up as "bishop of bishops," or "compel his colleague to the necessity of obedience."

Have you ever seen this quoted by a Roman Catholic apologist? Do you think it's because they don't know about it?

No, Cyprian was right, and history remembers him, not Stephen. Numerous writings of St. Cyprian have been preserved, but none of Stephen's.

But our subject here is not whether Cyprian was right. The subject is whether Cyprian can be quoted as proof of papal primacy in the 3rd century church. And clearly, he cannot be.

Even if St. Cyprian was a heretic and dangerous man, the issue is that Catholic apologists are quoting him in defense of the bishop of Rome having the authority of a pope in Cyprian's time. Quoting him out of the context of his life and his other sayings is simply dishonest.

One of Cyprian's colleagues wrote him, adding this:

And in this respect I am justly indignant at this so open and manifest folly of Stephen, that he who so boasts of the place of his episcopate, and contends that he holds the succession from Peter, on whom the foundations of the Church were laid, should introduce many other rocks and establish new buildings of many churches; maintaining that there is baptism in them by his authority. ("Epistles of Cyprian" 74:17, from The Ante-Nicene Fathers, vol. V)

Could Firmilianus, the writer of this letter, have written such a statement to someone who didn't agree with it? Since St. Cyprian openly disagreed with Stephen on just this matter—that heretics should be readmitted to the church without baptism—there is no doubt that he agreed with Firmilianus' statement. At the end of the letter, Firmilianus adds:

Stephen is not ashamed … to call Cyprian a false Christ, a false apostle, and a deceitful worker. (ibid. 74:26)

"St." Cyprian did agree with Firmilianus, and obviously Stephen knew it!

Why Does St. Cyprian Mention Rome and the Popes Fabian and Cornelius in the Catholic Apologists' Quotes?

Actually, St. Cyprian doesn't mention any popes. He mentions two bishops of Rome, Fabian and Cornelius. He does not call either of them pope. The Catholic apologist who wrote me added "[Pope]" in brackets to St. Cyprian's quote.

The reason Cyprian mentioned those two bishops is because the heretics at question were the Novatianists. The Novatianists were followers of Novatian, a Roman elder who split from the congregation of Rome when Cornelius was appointed and began his own congregation.

Thus, Cyprian mentions them as departing from the leadership of Cornelius because they were in Rome and were leaving Cornelius' leadership.

It is also true that Rome is in a special way "the chair of Peter."

Despite what Protestants say to the contrary, there is strong and unanimous tradition that Peter spend the last few years of his life as an elder in Rome. In fact, 1 Peter, in the Bible, practically says so. He calls himself an elder in 1 Pet. 5:1, and there is little doubt that the reference to Babylon in 5:13 is a coded reference to Rome.

Thus, Cornelius did have a succession from Peter.

But does this imply that Cornelius was a pope, possessing alone the keys of the kingdom of heaven and having authority over all other bishops? 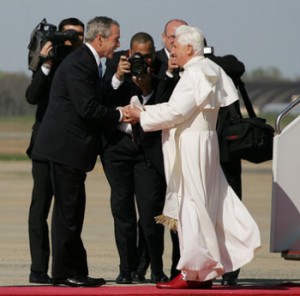 President Bush greets Pope Benedict XVI
Even this Pope is forced to lean on misquotes from St. Cyprian to justify his authority

Honesty demands that if a Roman Catholic apologist is going to quote St. Cyprian as supporting the idea of a papacy, then he should mention that Cyprian called a council of 87 bishops that unanimously declared—after specifically disagreeing with the bishop of Rome—that no bishop has authority over another bishop.

Honesty demands that he mention that St. Cyprian referred to all the bishops as one episcopate to whom Peter passed on the keys.

However, such honesty would disintegrate all claims to there having been a pope in the early Church, and that Roman Catholic apologists simply cannot allow. If they did allow it, they would cease, by definition, to be Catholic apologists!

If they did their arguments would evaporate. Thus, they have to choose to let their honesty evaporate instead.

Or return to Infant Baptism