Athenagoras is a virtually unknown apologist. He is not even mentioned in Eusebius Ecclesiastical History, which preserves more of early Christian history than any other work.

Athenagoras' A Plea for the Christians produced one of my favorite quotes and descriptions from early Christianity:

Among us you will find uneducated persons, craftsmen, and old women, who, if they are unable in words to prove the benefit of our doctrine, yet by their deeds they exhibit the benefit arising from their persuasion of its truth. They do not rehearse speeches, but exhibit good works; when struck, they do not strike again; when robbed, they do not go to law; they give to those that ask of them, and love their neighbors as themselves. (ch. 11)

What is Known about Athenagoras? 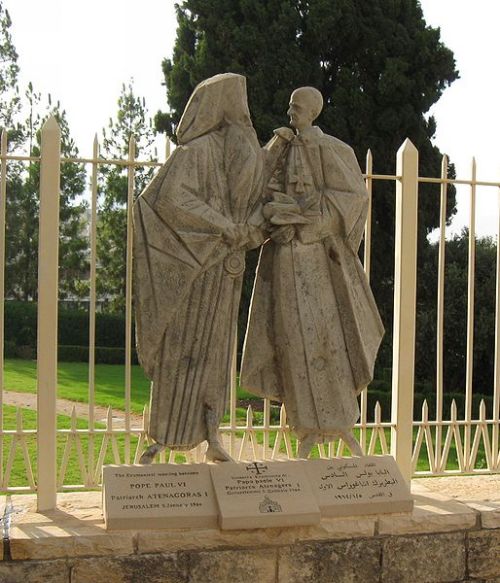 Statue of Athenagoras I, patriarch of Constantinople; d. 1972

Obviously, this isn't the Athenagoras that this page is about. There are no pictures of the unknown, 2nd-century apologist, so the best I can do is a modern namesake. | By Ori~ via Wikimedia Commons

His writings, however, tell us something about him, and they are impressive. Philip Schaff says that "all historians put a high estimate on Athenagoras" (History of the Church, vol. II, sec. 175). He also quotes Sir James Donaldson, a 19th-century Scottish scholar, as saying:

Always he has his main object distinctly before his mind, and he neither makes a useless exhibition of his own powers, nor distracts the reader by digressions. His Apology is the best defence of the Christians produced in that age.

As far as dates go, Plea is addressed to Roman emperor Marcus Aurelius and his son Lucius, who were co-emperors from A.D. 177 - 180. This fixes the time to a very narrow window.

Though honored as eloquent and skilled in his defense of the Christian faith, he is sometimes accused of Montanist leanings because he refers to the remarriage of a widower as "a cloaked adultery." Because we know nothing about him, there is no way to know whether he wrote as a very strict Christian or whether he had actually embraced Montanism.

Athenagoras also comments that the old covenant prophets gave their prophesies in a state of ecstasy, their minds overcome, and the Spirit of God speaking through them like a flute player plays a flute. Montanists loved ecstatic prophecy, but ecstatic prophecy was not rejected by the apostolic churches, either.

We do at least know where he was from because he subscribes his Plea as Athenagoras the Athenian.

Also, despite how excellent Athenagoras' apology was, it was certainly never read by Marcus Aurelius, who acknowledges in his own writing that he had received such letters, but he simply mocks them.

A Plea for the Christians

It begins by asking that Christians not be punished for a mere name, but on the basis of actual crimes, if any have been done.

He then lists three charges regularly made against Christians:

His answer to the first charge is perhaps the most important. Christians were called atheists because they did not believe in the pagan gods of Rome. Athenagoras refuted this by describing the Christians' belief in the one true God.

In describing their faith in God, Athenagoras clearly explains both the Trinity and the idea of a "substance" or "essence" of God, the latter being the very topic that was at the heart of the Council of Nicea a century and a half later.

Further, Athenagoras is writing to the emperor, trying to state what all Christians believe, not what some portion of them believe. He gives no indication that there was any competing view of the relationship between Father and the Son, though we know that modalism ("Jesus only") had already reared its head at that time, though with little success among Christian leaders. Theology was just not important enough to those early Christians for error to spread among leaders by means of debate.

This can be seen in the rest of the letter, which goes on to address the behavior of Christians in refuting the charges of cannablism and incest.

The Christians would then force the new convert to be a part of eating the dead baby by threatening to turn him or her in for the murder. They would then throw pieces of the baby to dogs tied to the candle stands of the meeting hall. When the dogs went for the meat, they would overturn the lamps, plunging the hall into darkness, and rampant immorality would ensue.

This was all nonsense, of course, and Athenagoras explains that far from committing sexual immorality, Christians avoided even thinking about it. Far from killing babies, Christians would not even return blow for blow to adults.

Throughout Athenagoras marvelously turns the tables on his accusers. He shows the folly of worshiping statues and of worshiping gods that are known for the most horrendous behavior themselves. The Roman gods had committed acts that would have any Roman citizen thrown in a dungeon or put to death! Anyone familiar with Greek and Roman mythology will know that several of the gods ate their own children, and Athenagoras gives several examples of incest among the gods.

And the Romans themselves both aborted their unwanted children and left them exposed to be found and raised by strangers or to die from animals or the weather. Further, the rampant immorality in Roman society meant logically that at least some unknown incest was occurring because of promiscuity and men who didn't know they had fathered children.

Athenagoras sums this up by quoting a proverb: "The harlot reproves the chaste."

On the Resurrection of the Dead

Thus, arguments in defense of the resurrection were common among the early Christians.

Athenagoras' defense is a notable one because he was an Athenian. In Acts 17 we learn that when Paul was Athens, he was given a hearing ... until he mentioned the resurrection of the dead, which ended the meeting at Mars Hill (v. 32).

Athenagoras the Athenian brings it back up more than a century later with a long, detailed defense of the resurrection.

Athenagoras' A Plea for the Christians is well worth reading. The apologies of the 2nd century give a clear, consistent picture of early Christianity; a Christianity that already held to those tenets which would be immortalized in the Nicene Creed and that laid great emphasis on obedience to the commands of Jesus Christ.

For who of those that reduce syllogisms, clear up ambiguities, explain etymologies, or of those who teach homonyms and synonyms, predicaments and axioms, what is the subject and what the predicate, and who promise their disciples by these and such like instructions to make them happy—who of them have so purged their souls as, instead of hating their enemies, to love them? And, instead of speaking ill of those who have reviled them (to abstain from which is of itself an evidence of no mean forbearance), to bless them; and to pray for those who plot against their lives?

On the contrary, they never cease with evil intent to search out skilfully the secrets of their art, and are ever bent on working some ill, making the art of words and not the exhibition of deeds their business and profession. But among us you will find uneducated persons, and artisans, and old women, who, if they are unable in words to prove the benefit of our doctrine, yet by their deeds exhibit the benefit arising from their persuasion of its truth: they do not rehearse speeches, but exhibit good works; when struck, they do not strike again; when robbed, they do not go to law; they give to those that ask of them, and love their neighbors as themselves. (A Plea for the Christians 11)