Angels of the Churches

The seven stars are the angels of the seven churches.

The most common explanation for the angels of the churches is that they are the pastors of those churches. Of course, pastors is not proper terminology for the late 1st century. "Bishops" would be the appropriate term. 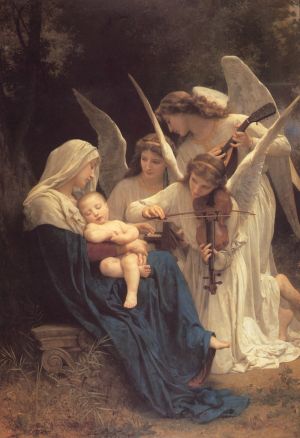 All angels in the Bible are male, so this painting is all wrong, but you have to admit it's beautiful.
Painted in 1881 by William Adolphe Bouguereau.

That is not typical for the Bible. One symbol does not typically represent another symbol.

Often this is not a problem. Sometimes, though, failing to translate a word can lead to misunderstandings, whether minor or major. The word seraphim is a good example. It is left untranslated in Isaiah 6, but seraph actually means something.

It is the same way with angelos. It actually means "messenger," and it is sometimes translated, rather than transliterated, in the New Testament.

For example, in Matthew 11:10, there is a prophecy about a "messenger" who would be sent before Jesus to prepare his way. That messenger is John the Baptist, and the Greek word used there is angelos. The same is true in the parallel passages in Mark 1:2 and Luke 7:27. In Luke 7:24, men sent from John to Jesus are referred to as "messengers." Again, the Greek word is angeloi [plural of angelos].

The Angels of the Churches Are Messengers

This is where things get fascinating.

Angels of the Churches are Messengers
Evidence One: Clement of Rome

Supposed to be Clement of Rome

There is a famous early Christian letter called First Clement. It is very likely the earliest Christian writing outside of the New Testament.

Of course, the church in Rome doesn't write letters any more than Wal-Mart or Google could write a letter. Someone with authority writes a letter on their behalf.

There is one ancient piece of evidence that Clement had such authority.

Angels of the Churches are Messengers
Evidence Two: The Shepherd of Hermas

I saw a vision, and that old woman came and asked me if I had given the book to the elders yet. I told her I had not, and she said, "You have done well, for I have some words to add." …

You will therefore write two books, and you will send one to Clement and the other to Grapte. Clement will send his to foreign countries because he has permission to do so. Grapte will admonish the widows and the orphans.

That quote is from The Shepherd of Hermas, a book written in Rome in the 2nd century (Bk. I, 2nd vision, ch. 4). The old woman represents the church in his vision, but the point we want to get from this reference is that Clement is the one with permission to send books to foreign countries.

I suggest this is because Clement's position was that of messenger of the church in Rome.

Angels of the Churches are Messengers
Evidence Three: First Clement

Clement Was Not Lone Bishop of Rome

Decisive evidence that Clement was not the lone bishop of Rome:

None of this would apply to John's churches, which had one head elder who was bishop. That would include all seven churches in the Book of the Revelation, which he led late in life, and which Tertullian called "John's foster churches."

I've already addressed elsewhere on this site that Clement could not have been the lone bishop of Rome in A.D. 96, when First Clement was written (see sidebar for brief review).

However, Irenaeus, writing in A.D. 185 (or so) gives a list of the bishops of Rome going all the way back to Peter, and Clement is third after Peter (Against Heresies III:3:3). In Irenaeus' day, Rome, as well as all other churches, would have had one lone bishop.

But why would Irenaeus single out Clement as that one if there were several bishops in Clement's day?

The most likely reason, in my opinion, is that Clement was the messenger of the church in Rome. His name stood out and was remembered.

This can be nothing more than a theory because I can't cite any historians who have said the same thing; however, the arguments for this position are a lot more compelling than simply guessing that maybe the angels of the churches are the bishops of those churches.

Origen on the Angels of the Seven Churches

Today, several years after I wrote this page, I ran across a book by Origen (c. 185-254) called On Prayer. In it he happens to mention the angels of the seven churches: "In John, certain angels are spoken of in the Apocalypse as actually presiding over churches" (ch. 6).

Origen explains that if angels watched over and ministered to Jesus while on earth, how much more so do they now that he is exalted. They "must now be ministering to Jesus that he would he would bring 'bring together the children of Israel one by one' and gather them from the dispersion, saving those who fear God and call upon him, and must be cooperating more than the apostles in the increase and enlargement of the church."

Interesting, but I don't agree. I think the messengers of the churches were forgotten as messengers by Origen's time (approximately 150 years after the Revelation was written). Instead, hindsight had made them into bishops.

Note: I need to add that the "children of Israel" to all the early Christians were the Christians, the new Israel, based on such verses as Romans 2:28-29 and Hosea 1:10. Origen was not referring to the future reconciliation of Israel that Paul talked about in Romans 11. He was referring to the gathering of spiritual Israel from all over the world.

Return to My Stuff